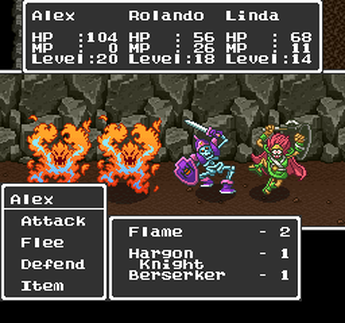 
​+ Improved visuals and audio (the visuals are far from impressive for the SNES though), improved interface in some ways (press X to interact w/o the menu commands, automatically climb stairs, can see how a piece of gear will affect your stats and if it's equipped or owned already (except you can't see how many herbs or antidotes you're holding)), less grinding (higher exp and gold gains from monsters), pretty good art direction (better in battle), adds some hidden items (check pots and dressers), easier to tell if a spell was effective in battle or if you are affected by a status condition, decent dialogue overall (somewhat humourous tone), vault (deposit or withdraw items and gold in the first town), some hidden paths, save feature (three slots, more kings to save at and in some towns an elder will save your game), animal NPCs, two party members (need to find them), nice in-game intro cutscene, much larger game world which even includes the map from the previous game (though it's mostly empty here), bigger background images in battle, monster groups (up to five and of three different types), somewhat more developed characters, remove status effects and revive party members at churches (you also get spells for detox and revivification though you get the revive spell pretty late), Holy Water and Repel (turns off encounters (with weaker enemies?) for a short period of time - only on the world map?), permanent magic keys (one for silver doors, one for gold doors, one for jail doors - helps with the backtracking problem from the first game), accessories (prayer ring (restores MP - can break), gold card (discounts), magic bell amulet (protect against enemy spells - except sleep?), some group target spells (can't make earlier spells into group target spells, will hit all enemies of the same type and in the same group rather than all enemies), some gear can be used as an item in battle for special attacks or healing, some interesting spells (repel, sacrifice, open), travel by ship and teleporters (few and not very useful for travel since your ship doesn't move along with you and you need it to reach a bunch of places), pretty open ended structure overall (will have to do some grinding to break from the planned path though and the world opens up more after getting the ship), can warp to the last save point you used with the wing of chimera item or Return spell (lvl 10 so a few hours in; would've been better if you could warp to a previously visited town selected from a list) as well as out of dungeons with Outside (lvl 12/17), party members no longer waste turns hitting the air if the target monster dies before it's their turn (however healing spells cast on dead allies are still wasted and if the character was casting a spell and the target dies or flees before their turn they will switch to attacking another monster instead without casting the spell), gear loot from enemies (usually crappy), some innovative level design (pitfalls, glide a few tiles on the map by jumping off of a tower location at one point), less limited inventory (but each member has a separate one making shopping a bit slower; 30 slots in total, quest items don't have a separate inventory), gladiator battle (pretty easy though), some decent puzzles (transform the princess, a magic flute lets you know if there's a crest nearby (you'll hear an echo)), mysterious cap/mad cap (reduces MP consumption by 25%, pretty rare), in-game epilogue, more interesting final boss,

+/- Party members are now assigned classes (automatic), no more need for torches to see in caves (would've been nice to keep a nerfed version of the illumination effect just for atmosphere), level cap at 30, plenty of locked doors that can't be opened until a few hours into the game, automatically gain new spells when leveling up, lottery mini-game (similar to SMB2, very hard to win though and you can't buy tickets normally (only find them or get them when buying enough of other items from clerks), came with a strategy guide?, no battle formation features, there's an in-game world map but it takes a long time before you get to it (dragon king's/charlock castle) and it's not that useful, Surround=Target misses more, static difficulty, magic armor no longer has a regen effect?, slower but cooler teleporter transition effect, only one ending, silent protagonist throughout, keep exp and items after dying (you just lose half your gold and quest progress), no censorship in this version (religious symbols, puff puff girl),

- Herbs no longer stack, new members start at level 1, the overworld graphics look nearly identical to the ones in DQ1 (was at least a bit different on NES, most non-battle sprites are the same as well), no running (fairly slow movement, no run code), the grinding is still pretty bad (can give yourself tons of gold or levels with codes (as well as edit individual item costs) but not make enemies give something like 2x rewards), dead space (several dungeons) and dead ends, frequent random encounters (can be turned off with a code), same interface issues as in DQI, mostly uninteractive backgrounds (can't examine/search most things either), still a basic story and cliché characters, can't choose which enemy in a group of enemies of the same type to target, too much backtracking to open locked doors, no battle animations (except for weapon slashes and spell effects), some tedious parts (looking for Rolando, being told to go to the lorasia shrine just to be told there to go to the northwestern lake cave for the silver key instead), NPCs can take a while to move out of the way in narrow spaces, no resting on the world map, no quest log or journal feature, no diagonal movement, the cool title screen graphics from the english NES version are missing, some story oddities ("open the treasure chest!" said by two Beranoor NPCs in the epilogue - where is it?, the king of lorasia doesn't react to you having found prince rolando, the lonely guy outside Pelpoi doesn't react to you opening the door into town, some jailed NPCs don't react to you opening the jail door, can't tell Luke where he's from?, the party often doesn't say that they've already found items that NPCs give clues about - several about the sunken treasure for example), can't use l/r to cycle between members in the menu, healing spells cast after all monsters are killed in battle are skipped, no bosses in some of the dungeons, tedious how the menu closes down every time you use a healing spell, trial & error (pitfalls and looping rooms in the path to Rhone cave, for some reason the Evil Statue is referred to as the Eye of Malroth by the two NPCs that mention it in the game, poison traps in chests in some later dungeons (unavoidable), fire crest location (you can get a clue that it's at the fire monolith, but you have to search that entire area for the spot since there's no visual clue there), water crest clue and location (no clue to finding the monster in Berandor who gives you the hint (go south into the wall after using the teleporter) and then no visual clue in Moonpeta (it's in the NE corner of the jail cell with monsters in it), getting to the swamp below the path to Rhone - you need to find the hidden path to the outside area of the Rondarkia monolith with the friendly monster (which you've teleported to from Berandor without realizing it) without clues and then exit that area through the poisonous swamp ground tiles surrounding it and making it seem like you can't walk through it (the worst thing is that in the NES version you would exit the shrine/monolith just by going up the stairs; either the elder inside the monolith could've told you about its hidden exit besides just saying "the path to Rhone is to the west of this monolith" or the evil statue/eye of malroth could've shown the hidden path to its outside), demon priest's explode attack, Outside doesn't work in ruined towns or regular towns?, hidden clue to the water crest location, finding the dew's yarn in the northern dragon's horn tower (no visual clue and no window on the third floor)), some fake dialogue choices (choosing no when the king asks you to become the next king in the epilogue, choosing yes when you encounter monsters in town kidnapping a girl, guy in Radatome asking if you know about the sunken treasure), the fortune teller's clues are almost useless (only tells you which cardinal direction to go), finding Rogue Fastfinger can be very tricky if you had encountered some of the empty and locked rooms before (meaning you wouldn't be as thorough in searching his cell) - you also don't get any clues from searching every tile of the cell nor any good visual clues about the hidden path in the wall), no party banter
​
GBC version (check): ?