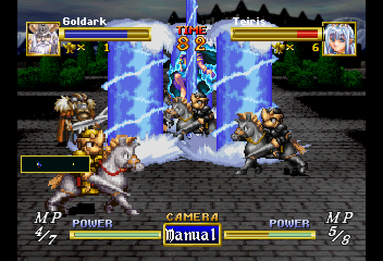 ​
+ 8 different playable factions (2 of them need to be unlocked by finishing the game) with their own perspective on the story, 14 general classes, terrain effects, level up your generals and castles (increases their recruits capacity and defense bonus, use fortify and/or have the right generals in them (70+ intelligence)), strategize between battles (domestic affairs phase - award generals (gain award points by winning battles; increases their capacity for commanding one unit type with each one and makes them more loyal, can be given to any general regardless of who actually earned it), talk to your generals and captives (can recruit some enemy generals), search locations (items, recruitable generals), view other countries, equip generals with items; recruit troops in castles), some funny/nerdy battle dialogue ("curse this infernal eye patch!", "alas, I have so very much to learn about strategy..."), nice intro and ending cutscenes, pretty nice artwork stills during cutscenes, diplomacy (very crude and with a high risk of losing the army/party leader's troops - each character seems to draw from a limited stock of generic responses that don't always fit each other properly), world map turns/weeks and battles happen in semi real-time (time limited RT with pausing), early hero focused RTS, up to 200 troops in a battle without slowdown, good animation and art direction (many unique looking characters), character portraits during dialogue (not animated though), non-linear structure (the world map is open to you at once though some locations are much better defended than others), speed up text on a per paragraph/text box basis, nice spell/special attack effects, can repair castle ruins, multiple save slots per game (time info) - can only save during the domestic phase though, good interface in some ways (can release soldiers back into a castle's recruitment pool to let other generals recruit them, can convert one unit type to another at castles, shortcuts for command and special attack menus in battle, overview menu of armies/parties and generals on the map screen - can't sort the list of generals though?, can quickly move the battle camera between your and the enemy's general or to your troops), up to 5 generals and 500 troops per army/party, can gain more than one level per battle (rare though), public support mechanic (potentially more award points), formations (most of them aren't that useful though), pretty good visual variety, some optional and hidden generals, very good art direction

+/- Perma-death (a char generally won't die from losing a duel though and can be healed with an item later if badly hurt), some darker themes (Zanon's suicide, Goldark's older brother), no world map generator, waiting in battle gives you the first strike, need to find and recruit 7 other chosen characters to beat the villain, set character classes, generals don't need to be in the main castle to be talked to or awarded during the domestic phase, somewhat limited control over which battles you'll fight (the game randomly picks an enemy general in the battle preparation phase - unless you try diplomacy and fail in which case the enemy gets to choose a general to attack the army/party leader with and it loses all its troops as well), some generals will either object to you sending them into battle or demand to go first and some can leave if you don't use them enough, generals usually don't have a particularly thoughtful reason to join you or not to join you, a castle's level can decrease simply from defending even if you did great, revival magic is a bit overpowered and so are samurai vs. dragons, you need to use specific routes when traveling between locations (adds a bit more tactical depth and challenge), some magic/special attacks need to be timed to do good damage while others don't, can only equip one item per general, no siege weapons or castle destruction mechanics, the monarch/main char can't search, time limit on battles (battles end in a draw if neither general is killed), enemy general levels will be three levels lower than your highest leveled general besides the ones that gain levels from battles, some classes are a bit weak (thief, ninja?, beast, fighter?, monk?), strength stat is almost meaningless? (each char/class has their own modifier which weighs much more heavily), no shops, no character class or specials customization (can have them use new unit types using items though), the fortification command can fail, Fandaria is overpowered? Tristan as well, formations are the only way to split your one big squad of soldiers into smaller ones, no auto-battle command, it's a good idea to stockpile awards for use on the 8 dragon force members in the late game to reduce grinding - give 5-6 levels to officers

- Trial & error (the game automatically sends your 8 force generals to the final battle after gathering them at Bloodly castle - there's also a sudden difficulty spike here since if any of your force generals die it's game over, need to equip the dragon sword in the domestic phase before attacking the robot for the second time or you'll get a game over (your general is wielding it in the cutscene before the fight so this is kind of bs), the Skull Children stop spawning during the shrine quest so if you didn't make sure to level up each dragon force general you'll face a difficulty spike here, the wyvern and solar flare spells can hit your own units, part of the shrine puzzle (some of the clues don't make sense), some surprise betrayals as Goldark, Junon vs. Wein surprise battle, surprise attack at Shadow Tower, surprise attack by Goldark after uniting the world, hidden time limit in the battle preparation phase, the game doesn't explain what the shrines are for until much later on, hidden loyalty stat - need to talk to all generals to check their mood (if you don't want to bother with this for non-force members for example you can just avoid using them in battle and have them sit in castles instead - the stat won't come into play until they're used in battle), hidden defense stat, hidden escape stat - chance to escape without being captured or killed (much higher for dragon force members and 100% for your main char), very limited control over units and commanders in battle (units can't be directly controlled - just vaguely ordered around, commanders can only use spells vs. enemy commander/center of screen or duel once everyone else has died (which is an automatic battle) - would've been better if you could choose to duel before wasting your troops, some countries can't recruit some generals (they kill them instead), only one unit type per general (limits tactical options during battles), somewhat sloppy dialogue (poor translation at times, characters sometimes have unnaturally spoken lines), no tutorial?, slow controls on map screen, sometimes dumb plot (your character (Tristan faction) immediately trusts a stranger saying he's one of the chosen), some interface/control issues (no "search all available" option and no option to speak only with angry generals in the domestic phase, regrouping will only bunch units together on the vertical plane so they can end up in a long straight line fairly easily (means they're vulnerable to certain special attacks), troop transfer is rather slow and you can't make party/army templates with specific generals in them to quick select from - also can't fast travel (see HoMM 2-3 for example), lack of char info shown in the equip item menu and some other menus, the game repeats tutorial messages throughout, can't join nor split armies outside of castles, healing generals in castles is too slow, menus don't wrap around however you can press l/r to go to the top or bottom, small text boxes, sometimes slow menu transitions and some text can't be sped up, if you encounter an enemy between locations and it flees then your army/party also retreats (back to the nearest castle?), pretty slow movement on the world map - can't increase game speed, slow recruitment and you can't choose amount of units to recruit (the game automatically tries to recruit as many units as possible for the general you picked), no end turn command, can't speed up or skip special attack animations (units keep moving but stop attacking in melee during them), so-so overview in battle (no proper zoom out function (pressing down zooms out but also scrolls down)), ), can't do anything in most neutral locations, sometimes random unit AI (they will sometimes attack lone enemies one at a time instead of encircling them which is quite wasteful - again you have no control over this, sometimes if you use melee your units will end up circling in front of the enemy general with a few enemy ranged units to either side of them, sometimes enemy units will just stand around while their general is killed), some cheap random events (random Dragon attacks before the final battle, Skull Children - three generals that keep respawning while gaining levels in a random nearby village - if you can make a CPU player kill them they'll be replaced by two thief generals (not sure if recruitable)), some generals look the same and even say the same things), if a general is angry they might still leave after being given a reward or item, if a general has left and then re-joins via searching they'll act as if you've never met before, you'll keep finding low tier items in the late game and can't throw any away, Goldark's final assault seems to happen at a set time so if you unite the world before it you'll have to wait for it (about 4 turns/weeks for me), fewer items for mage-type generals?, drawn out endgame due to having to wait for events to trigger, unit strengths aren't explained in-game, slow final battle against the robot, very easy final boss,

Bugs:
-Wein sort of stays hostile after recruiting him as Tristan (attacks on the world map then immediately escapes until he has a castle - can't be attacked (your army auto-escapes if you try) until you progress the story and he's attacked by Goldark
-Glitchy music in Bizhawk 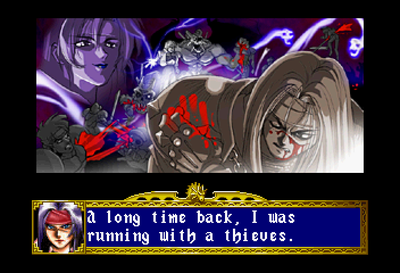 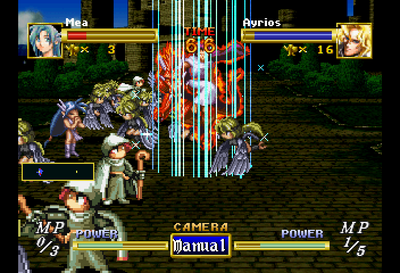 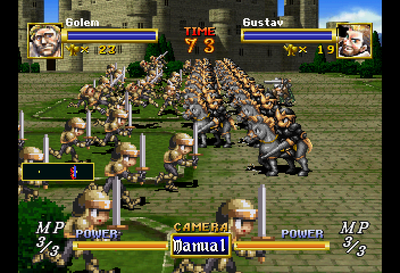 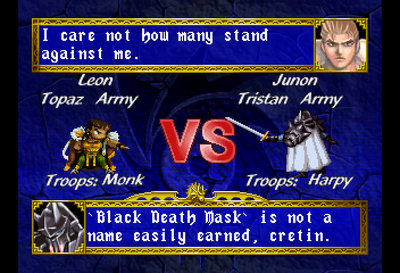 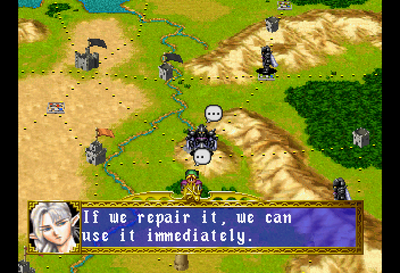 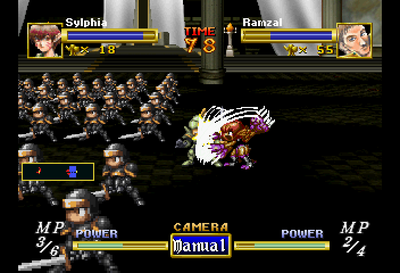 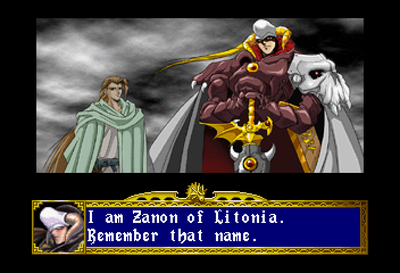 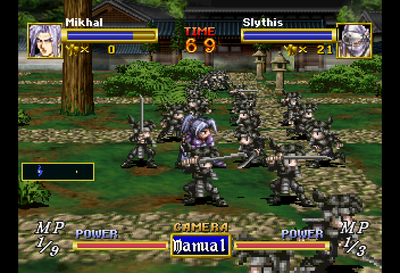 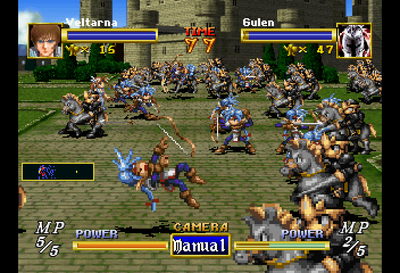