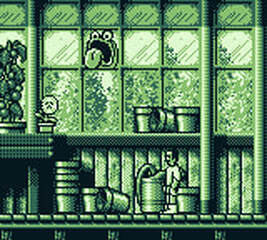 
​
​
+ Portable teleporter item (can be dropped and teleported to later like the beacon in Exile (AMI/C64)) - potentially removes most backtracking, plays a bit faster overall (besides the underwater area), some other tool items although they're used automatically by the game (such as the raft which spawns a moving raft in the garden or the scuba gear) while the player is given a clue to what happened - the rest are key style items, hub area outside the castle (the moat which connects to the forest, garden, ocean, village and egypt), some NPCs with fetch quests, same basic map feature (shows how the rooms are layed out and which floor you're on but no specifics about the rooms themselves, shows x- and z-plane exits but not y-plane/vertical exits, doesn't show if a door is locked, the floor layout is shown right away instead of filling in as you explore and the first couple of items you should collect are marked on it but not the rest, ), horror theme but somewhat lighter in tone, play as Frankenstein's monster trying to reassemble a golden tablet (depicting his gf from the prequel) to pay his electricity bill, game shows your completion percentage in the menu, great visual variation in the backgrounds and enemy variation is pretty good as well (several enemies look different but act pretty much the same though), some control improvements (tighter movement and turning, can do a standing jump and then move r/l in mid-air, can shoot while jumping forward, can climb stairs), named rooms (can be toggled on/off along with sfx and music using a machine early on in-game), temporary shield power up (~20 sec, used when picked up and can't be saved for later), easier to navigate without the map overall

+/- Starts off linear but then gradually opens up, collectathon (4 tablet pieces, 10 coins and various key style items), your weapon works like a boomerang but only when crouching, some unkillable enemies early on, the map is shown in a TD perspective while the game is side view with a bunch of layers via doors (similar to Goonies 2 and WB3 but with more layers), can't move while shooting, no energy drops from enemies (there's an energy restoration machine in one single room (Floor 1 - have to repair it first here) but no placed drops unlike in the prequel), password save (doesn't save a dropped transporter's location, can be accessed at any point, can also load the last position you saved at - one slot per game), no knockback when taking a hit, oxygen mechanic underwater, the screen quickly fades to white when moving between rooms (can get somewhat annoying when moving quickly through an area), some items only appear after another one is collected, respawning enemies (sometimes while you're in the same room), can't attack underwater, the energy restoration point isn't marked on the map after finding it but it's easier to find and get to here,

- Would've been more fun to use most items manually and see the effect they had on the environment (such as blowing away the wall at the mine), Various control and interface issues (can't recheck item descriptions/clues, no sub area maps outside the castle besides in the shipwreck, some leaps of faith (can't look down/up), still can't scroll the map manually (have to move to the edge of it - it also scrolls very slowly from the default position each time you view it when you do), still have to check the menu to see your current health, still has auto-jumping if you hould down the button (unless you also start shooting), can't jump down through platforms which you can jump up through, no invincibility time when taking a hit - your energy keeps draining like in Turrican), no in-game explanation of the backstory (check the manual), several of the interesting looking objects you see in the rooms aren't interactive, overly tight jumps in some areas (the forest), some trial & error (die if you go into the ocean without getting the right item first, death pit in the garden where you take the raft, some cheap enemy placements near room entrances, finding the item to fix the HP restoration machine - makes the beginning kind of tough, take damage from going into the haunted hall in the village without having the right item), most items are placed kind of haphazardly without a platform/puzzle/combat challenge leading up to them, no alternate weapons or weapon upgrades, no bosses, a bit repetitive (lacks interesting level gimmicks and advanced platforming puzzles), lame ending, no lantern here?