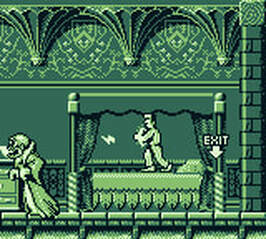 
​
​
+ Basic map feature (shows how the rooms are layed out and which floor you're on but no specifics about the rooms themselves, shows x- and z-plane exits but not y-plane/vertical exits, doesn't show if a door is locked, the floor layout is shown right away instead of filling in as you explore and the first couple of items you should collect are marked on it but not the rest, ), horror theme, play as Frankenstein's monster trying to reassemble his girlfriend and bring her back to life, game shows your completion percentage in the menu, great visual variation in the backgrounds and enemy variation is pretty good as well,

+/- Collectathon gameplay (you never use any of the items as tools besides the keys and there are no new moves or other permanent upgrades to gain), classical piece used as the single in-game song (Beethoven?), plenty of unkillable enemies early on,  the map is shown in a TD perspective while the game is side view with a bunch of layers via doors (similar to Goonies 2 and WB3 but with more layers), can't move while shooting, no energy drops from enemies (instead there are a few placed ones here and there which don't respawn as well as an energy restoration machine in one single room (H5 on Floor 4), password save (can be accessed at any point, can also load the last position you saved at - one slot per game), can't do a standing jump and then move r/l in mid-air, can't restore the lantern? (can still see enemies and layouts though), no alternate weapons or weapon upgrades, no knockback when taking a hit, the room shakes for a bit if you fall far enough before landing from a jump but it doesn't seem to have any effect on gameplay, the screen quickly fades to white when moving between rooms (can get somewhat annoying when moving quickly through an area), some items only appear after another one is collected?, no bosses,

- Various control and interface issues (energy restoration points aren't marked after finding them, can't scroll the map manually (have to move to the edge of it - it also scrolls very slowly from the default position each time you view it when you do), have to check the menu to see your current health, floors are numbered in reverse order so you go the lower the number and vice versa, no item explanations in-game, somewhat unresponsive movement, can't shoot in mid-air if you jumped forward, auto-jumping if you hould down the button (unless you also start shooting), you'll start falling if you start shooting in mid-air instead of the jump arch completing like normal, can't jump down through platforms which you can jump up through, if you turn around quickly there's a sliding animation but if you let go of the d-pad slightly there isn't one so it's actually faster, can't simply walk up stairs, no invincibility time when taking a hit - your energy keeps draining like in Turrican), most of the interesting objects you see in the rooms aren't interactive, the complete lack of a map on the bottom floor creates a difficulty spike there, some unavoidable damage?, plays a bit slower than the betas of the other versions,
​