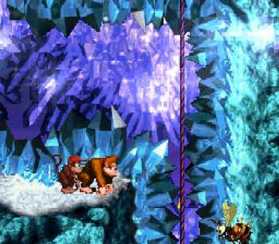 -
Some trial & error (mine cart rides, some bosses, chase sequences, stop and go station, hidden area entrances)
large character sprites + fast pace + low res = small margin for error
a bit repetitive (repeated bosses and themes)
somewhat floaty controls and scrolling (less reaction time, can’t look up/down to adjust quickly)
somewhat sloppy hit detection
​Diddy is much more useful than Donkey, pathetic bosses overall, no difficulty options, some automated parts (see Sonic), collected lives aren't saved (when loading a game you're back at 5 lives), an opened entrance to a bonus stage closes again if you move just a screen away, Cranky repeats the same clue at times and you need to revisit over and over because the game only gives him a few lines each time (these are also timed so you can easily miss details in the clues), jump height control is better when carrying a barrel, you’re sometimes teleported some ways back into the current stage after beating a bonus stage instead of where you entered it, one problem with the hidden interface is that you can’t check your stats when you want to, some graphical nuisances (somehow the weather is always the same at Candy’s save point, some jumping enemies don’t have a jump animation), one tedious factory stage with the lights going on and off