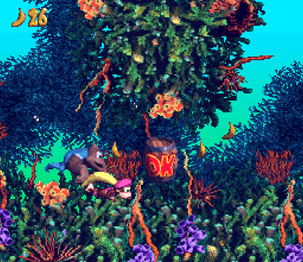 ​
+
Good variation, good bosses overall (first one rips of earlier games though - Ristar, Super Metroid, Sonic & Knuckles), some new bonus stages and mini-games, throw your partner (Kiddy can be used to smash open cracks in some floors, use it to get to unreachable platforms by throwing Dixie), one new animal with new abilites (elephant who can pull barrels towards it and squirt collected water to kill enemies with (apparently it's lethal to most of them)), many hidden silver coins (buy items or hints) and bananas, more detailed background textures, some interesting stages (hungry fish chase, 2.5D waterfall stages, ‘ride one of each animal’ stage)

+/-
Kiddy Kong replaces Diddy/Donkey (he looks slightly retarded), even more focus on collecting (especially in the hidden world where you need to pay a bunch of coins just to open up the path to the next stage), no time limit, easy to rack up extra lives, more of a kiddy atmosphere than before (which doesn't gel with the higher difficulty), you still become rather than ride the animals (each has a maximum of 2 HP), throwing character pauses in mid-air while performing the move, Wrinkly takes Cranky's place (not as memorable, usually sleeps - Cranky now an opponent in the tent mini-game (seems odd since he's the oldest), doesn't take place in jungles/tropics anymore

-
​Still has poor jump height control and floaty movement, slower pace overall with many minor puzzles (that take up time rather than being hard to figure out for the most part), worse art direction with some odd color choices and designs, slow and clunky NPC interaction, tedious RPG elements (fetch questing (backtracking to NPCs in the hub world), moving around using the boat), some tedious labyrinthic levels, some of the bonus levels are pretty tedious (collect the bananas), inconsistent damage conditions on the DK coin crocodiles, harder to ride barrels due to them rolling faster after bouncing, trial & error (somewhat loose scrolling makes it hard to react to what's behind or above at times, bosses, piranhas, bouncing spider/platform thingy apparently can't hurt you, can't look up down - leads to leaps of faith or having to slow down), sloppy hit detection at times (spider boss, robot flies when playing as the elephant), tedious parts (final boss, elephant gets scared of mice (could've been interesting but just ends up slowing down the flow of the game), sewer stages (second one is a water stage with forced reverse controls), lightning stage – seemingly random cheap hits), no ostrich or frog, some hints are useless, collected lives still aren't saved (when loading a game you're back at 5 lives), the rope climbing mountain stages play a lot like some of the last stages of the prequel, the way to open up the hidden world is suddenly revealed some ways into the game (the NPC who gives you clues about it just gives in after visiting him a few times)


Comment:
This one was a bit of a disappointment. While there are some great, creative levels (and bosses) in the game, they appear as exceptions among levels requiring exploration, learning new gimmicks through trial and error, and time consuming puzzle solving that mostly just serve to highlight the problems with the DKC engine (which is identical to the previous game as far as I can tell) - fairly large sprites combined with low resolution, inconsistent hit detection and loose scrolling. The last levels before the final boss are particularly nasty and seem designed just to piss you off rather than offering a legitimate challenge based on what you've learned thus far.

The great flow found throughout most of the prequels can still be achieved in a good number of the stages, but the process of mastery is interrupted by intrusive and clumsy JRPG design, forcing backtracking and an even larger emphasis on collecting than before. At its worst, the game reveals its biggest secret (the location of a hidden 'lost world' with a set of very challenging levels) with zero effort from the player, then puts up roadblocks in between each of these stages which cost 15 of a certain, rare coin to be demolished. You're gonna have to look up in which levels these are if you want to finish the game fully.

In terms of atmosphere DKC3 is also a mixed bag - Backgrounds are highly detailed and the change of setting is refreshing, while the NPC- and some of the boss/enemy designs seem unfitting and uninspired. Wrinkly Kong (Cranky's wife), sort of takes Cranky's place but has almost nothing of interest to say and most of the time is just sleeping in front of her TV. There's also some references to other Nintendo franchises and product placement of the N64, which came off as cynical rather than heartfelt to me.