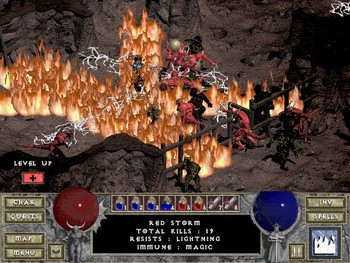 +
​​4-player co-op multiplayer (online)
​three different characters/classes (somewhat overlapping after a few levels)
town portal and teleport spells
adds a decent graphics engine onto the Rogue formula and makes it real-time
new gear shows on the character model (not very detailed though)
good voice acting overall, attribute system (get 5 points per level up to put into whatever you want - strength, vitality, magic, dexterity (similar to Seiken Densetsu 3)), decent interface for the time (hotkeys to submenus, skills/spells (F5-F8), an item belt and even user created messages in MP (F9-F12), random dungeon generation (makes every playthrough slightly different), you can replay the game with a saved character (equipment carries over as well), some decent humour (exaggerated characters, some quests), decent art direction with good concept art (similar to Warcraft II), difficulty options (multiplayer only though there is a workaround - start a NM/Hell game in MP, then go back to the main menu and start a single player game), gradually learn more about your enemies (after 15 kills of a certain monster you get some info on its abilites, after 30 you get the full stats), elemental affinities (75% resistance is max for player characters), save anywhere in SP (saves entire game state, not just the character), stealth aspects (you can decrease your light radius to sneak around, unfortunately a bit buggy - see notes below), The gradual lack of motivation for completing quests/going further down on purpose to simulate Diablo's summoning the hero? (if so, nice touch), dark atmosphere with decent backstory (manual, books spread out through the game)

+/-
Tile-based movement/world
no jumping or crouching & no strafing
randomized loot (can make the game too easy/hard in some sections)
somewhat limited inventory (some small objects take up too much space)
hacking problems online
shrines with random bonuses (need a guide to check what some of them do), no single player cheats, belts can't hold other 1-slot items than potions and scrolls, monsters don't respawn (except for King Leoric's summons), what loot you get from enemies usually doesn't correspond with what they're weilding in-game (for example: Fallen Ones weild sword and shield yet this doesn't mean that's what they'll always drop), quests are also somewhat random (meaning you don't get all of them in any single playthrough, but you can replay with the same character to eventually play them all), some hidden stats (to hit % bonuses, critical hits, etc.), Shrines (you'll want to read up on them beforehand if playing online (some have permanent negative effects), but the effects are sometimes interesting and can require some tactical thought), you can find the same quality of items on normal as on hell difficulty, friendly fire in MP (Holy Bolt is an exception), one can temporarily wield magic increasing gear to raise spell levels/learn new spells (they'll still be usable at that level after you remove the gear), you can grind in SP as well as MP by starting a new game, no spellbooks for some spells (Apocalypse, Infravision, Nova, Identify - can only be bought by Adria and the stock is limited+random (so your only reliable option is Deckard Cain), money is not an issue later on, backstory/exposition done mostly via books spread out through the dungeon and read by a narrator’s voice (the in-game story is very basic and rigid, your enemies basically wait for you to come to them save for a minor sidequest)

-
No running (also no teleport in town)
one save slot per game (means you can easily make beginner mistakes with builds or purchases)
simple and repetitive combat/movement/level design
repairing gear gets tedious (gear also gets destroyed if durability reaches 0)
so-so enemy AI (Butcher can't open doors, you can lure enemies using spells from off screen - picking them off one by one)
​the sorcerer becomes overpowered later on, can't enter town buildings, can't quickly review dialogue (forced slow scrolling w/ voice acting), some quest oddities (wounded soldier outside the church - how come noone hears him and goes to help?, similarly there's no reaction to the entrance to hell being right behind Pepin's home), some crappy equipment/spells (Telekinesis?, Guardian, Phasing (too long to cast where it would be useful), Inferno, Blood Star, repair/recharge (only use in emergency for replaceable equipment)), same ending for all characters, equipment switching is a bit clunky (need to open inventory and drag equipment between backpack and character model), finding small items dropped to the ground can be a problem (hard to see, harder when you're a Sorcerer killing enemies from off screen), Black Death enemy (-1 HP per hit permanently - important in MP), only 4 (non-random) quests in multiplayer, restocking on potions in town gets tedious after a while (more full potion drops or life/mana regen/steal gear would've made for a smoother playing experience), no equipment storage box (items dropped on ground stay there in SP or for the MP session duration, some mods help with this), somewhat tedious shop interface (can't make vendors hold an item for later purchase, staffs can only be sold to Adria, can't buy back sold equipment (sometimes a similar item will pop up though if it's not a unique), finding good equipment in shops is very time consuming), monsters will (rarely) spawn inside a 'fence' area very close to the player when entering a Cave level

Notes:
There exists a bug so that the blocking bonus is always 0, except during the first game a character plays.
Mana shield hit recovery bugs - If the player was going to die (=going into dying mode) during the normal attacks, it will be put into
standing mode by the Mana Shield, and thus avoid hit recovery, which would in some cases had been
the more correct mode. MS also prevents knock backs as it is not checked in the normal attack routines if the player
died. Finally, MS avoids any further attacks done in the last turn (=simultaneous attacks) while the player was dead.
There are quite a few bugs associated with fire and lightning arrows which makes them often deal erroneous
damage (way too high or no additional damage at all)
Stealth: when using items that decrease your light radius, they have to be on as you enter a level for stealth mode to work. If you ever remove your stealth items (thus increasing your light radius) and put them back on, you'll still have your light radius reduced as before, but monsters will now be activated according to the higher light radius you had before you put the stealth items back on (a bug in Diablo).
There is a bug in Diablo which makes any item which has 255 duration indestructible (Hidden Shrines exploit)
More bugs: http://freshmeat-blog.de.tl/Bug-Overview.htm 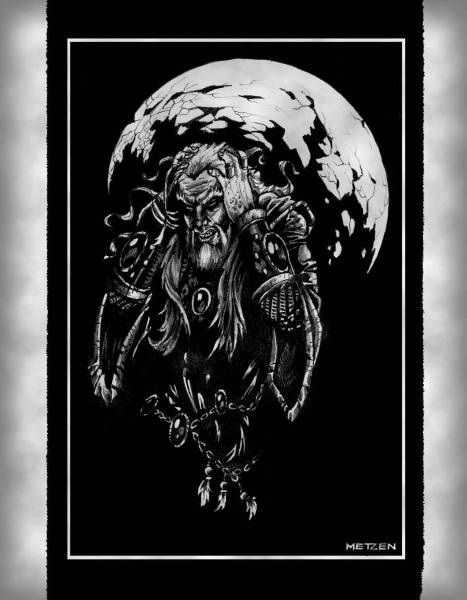