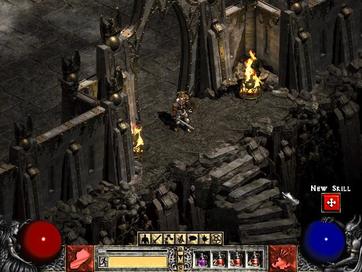 ​
+
Improved interface (press alt to show drops, run move, small mini-bar showing all submenus, better shops (buy back sold equipment), tomes (to put scrolls in), money has a single separate inv slot, belt upgrades, improved PvP, etc)
the skill tree system (adds some tactical depth, makes each character more unique than in the prequel, very customizable characters)
you can completely reset a poor character build (talk to Akara when in the first town - lets you reassign all stat and skill points) since the latest patch - however this only works once per difficulty level until you get to Hell mode (where you need to kill all main bosses and craft a special item from their unique drops)
multiple towns
five all new characters with differing playstyles (necromancer, amazon, sorceress, barbarian, paladin)
decent lighting effects, great cutscenes, new mechanics (gambling, horadrics cube (mix items to create new ones - losing the old items), sticking magic gems onto your gear, etc., minor talking options using the keypad in multiplayer), longer and more varied than the prequel, good art direction (except for some animations, color choices and silly enemies), much faster paced overall than the prequel, gear sets (get a bonus for wearing a full set), secret bonus stage (cow level), randomly generated maps (adds replay value/results in some dead space/dead ends), adds a stash (chest to put surplus items in for later, however it's pretty small and the space is only increased somewhat by the horadric cube (4x3)), difficulty and control options, hire mercenaries (they gain exp and can even equip stuff, they can't be revived or talked with, can't be ordered?), you can return to grind in previously beaten acts (monsters will respawn in SP, not sure about bosses?), difficulty options (Normal/NM/Hell/Hardcore (one life per character)), some npc dialogue differs depending on the character, waypoints (teleport between areas, activates in between games in MP on the current difficulty), good voice acting overall, new gear shows on your character sprite (in greater detail than before), 8 player coop/vs in MP, some secret entrances (Monastery)

+/-
Stamina bar (can be tedious when you just need to travel a known area)
resummoned enemies don't give exp
save was changed to save and exit in single player
corpse/gear retrieval after death made easier (it ends up in town if you re-load but the dropped gold is lost)
item drop abuse/tactic (+MF%) - only what you're wearing when a monster dies is factored into the item drop equation
​no benefit from Defense stat while running (only when walking/standing/attacking), healing works differently (no longer instant, you can drink a few potions in a row and still die from a heavy dose of poison), locked chest (potentially interesting but adds another layer of busywork and doesn't feel too special the way it's done), most dropped gear is pretty useless (even magic gear, especially in SP), what loot you get from enemies usually doesn't correspond with what they're weilding in-game, the in-game story is still quite basic and rigid - your enemies basically wait for you to come to them save for some sidequests (solar eclipse), the randomized loot from act bosses can make them unrewarding to beat (especially in LoD where you can get unusable class specific items), can't play as the warrior or sorcerer from the prequel

-
Some of the atmosphere is lost (more colorful overall, arcade feel with the new quests system (breaks the fourth wall with an instructional voice telling you what to do/who to talk to in certain situations)
the beginning is a wide open and artificial feeling area
some animations look silly (Wendigo, Barbarian walk animation)
ditches the dungeon crawler set up
exclamation marks above characters you need to talk to (feels cheap/arcade-y)
NPCs just standing around doing nothing (was a problem in the prequel as well)), still pretty repetitive (the game could be condensed quite a bit without losing its appeal as there is a lot of filler with easy enemies and dead space), shrines are much less important (temporary and often minor effects, there are some new ones though such as a skill increase and a stamina boost), some poor/only for convenience/situational skills, explode/poison potions kinda suck, still can't quickly review npc dialogue text, some trial & error (can't exit without saving - don't use stat reset if you don't know what you're doing, can't remove gems from socketed gear (added in LoD though you need to find a certain rune), battle tactics, monsters that blow up upon death), perspective depth effect looks odd (like lustiga huset in gröna lund dontcha know!), gold isn't very useful later on except for gambling (which is less useful than MF+ gear), you can no longer drop gear on the ground in town and have it stay there after saving and reloading a game in SP, some plot oddities (strangers asking for help before saying hello, Jerhyn meets you in the street/marketplace instead of at the palace, Cain assuming that you know how the horadric cube works before you get it, Act 3 cutscene (odd/funny scene with the angel talking to the old man), Cain about the second quest in act 4 - what hammer?), so-so mercenary pathfinding, some pathfinding problems for your character as well (you'll get stuck on some smaller obstacles that the character should be able to find its way around automatically), still one save slot per game, the level of interaction with the game world and it's structure is still pretty shallow (no swimming or climbing, no sidestepping or (regular) jumping, no action combos etc.), equipment switching is still a bit clunky (need to open inventory and drag equipment between backpack and character model), some chests/containers are still hard to spot (unaffected by pressing Alt), still can't make vendors hold an item for later purchase, some odd/ill fitting names for enemies (rat man=pygmee sprite, for example), npcs/enemies can move through some closed doors (Act 2), no monster stats shown after killing x number of a specific type (a feature in Diablo 1), although you do get to save people in D2 (as opposed to D1) you don't really get to see any effects of what you've done when revisiting previous acts, duplicates of set and unique items in SP

​
Notes:
Tons of mods available
Lord of Destruction expansion available
Cheat: Typing: '/players #' in chatbox sets no. of players in a single player game, letting you make enemies tougher while also increasing drops and exp gained,
Some audio bugs (might be a CD-ROM problem)
Bugs: http://us.battle.net/d3/en/forum/topic/6037267083