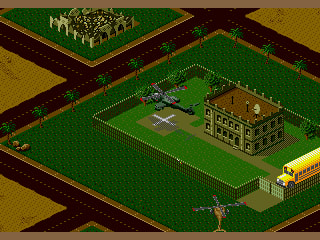 
​​+
Strafing
Select co-pilot before beginning (different stats, can only switch during a campaign if you find the MIA pilot Jake or and if you lose him by dying, Keith is the best until you can get Jake)
Good map system (shows the terrain/your position/roads+lets you cycle between these: currently selected objective, exposed supplies (cycle the objectives until you select this option, some more supplies are hidden in buildings (and under sand dunes? haven't found any)), some stronger enemies, landing sites - the bases where you drop off rescued people)
Each finished objective affects the enemy's strength in some way during that mission (for example destroying radar sites decreases their range and/or overall defenses and destryong the power station forces them to aim manually - this doesn't seem to do much against guard towers and tanks though...)
Basic control config and you can toggle momentum on or off (on means slower acceleration and deceleration when starting or stopping, off (control method "above") also means you rotate by pressing down/back unless you're also holding strafe (B)+that you can strafe while shooting with the weapon mapped to A though - this kind of strafe keeps the movement relative while pressing down is always back and up always forward during B strafing - takes some getting used to)
Can review objective briefings during a mission
Decent variation (rescue missions (MIAs, POWs, secret agents; picking up people is generally fast and smooth) - generally optional but each rescued person restores 150 armor so it's useful, capture fleeing enemy commanders, protection missions, one escort segment)
Satisfying weapon sfx overall
Decent cutscenes during some missions as well as artwork stills between some missions
Basic traffic (jeeps driving around)
Can destroy friendly buildings and units (penalized however)
Sometimes you'll fight alongside NPCs in a sense (MIAs are sometimes fighting the enemy when you find them; good for immersion)
Basic day/night cycle effect (morning/afternoon/evening color schemes - no in-game cycle though)

+/-
Password save (short)
Partially non-linear structure within missions (you're given 4+ objectives and some can be done out of order though you are recommended to do them in order for a smoother difficulty curve, some like the lost secret agent in mission 1 can't be done before you've triggered it by capturing an enemy commander which is a bit weird, can't end a mission without having finished every objective (see Wing Commander for example), )
Forgiving hit detection
Pretty tough from the get go
No communication from hq or an assistant during missions - the game does warn you when you're entering a heavily guarded area and tells you when an objective is completed though
Resource management - ammo & fuel (rockets are quite scarce even early on considering how much you'll waste on enemies and buildings)
Minor aim assist (generally good but can sometimes make you shoot something you didn't want to and it can't be turned off)
Start with 3 lives only - can find more during missions but they are rare (however dying doesn't mean you lose your load of people)
Fairly detailed mission debriefings however they don't show exact numbers (just point values) and you only get to see one stat at a time
Long missions
The game is based on the Gulf War
Sometimes an objective is considered completed before you've fully finished it
No level timers (have to destroy for example the SCUD launchers quickly to get the highest score though)
Can't upgrade your chopper or its weapons nor find new weapons over the course of the game

-
No checkpoints plus lives are rare (no option to start with more lives but you can use this password code to start with 10: BQQQAEZ, you'll also lose Jake if you die while using him)
Slowdown (seems to even affect your inputs sometimes)
Some huge difficulty spikes - guard towers and tanks together are too strong (you'll be ambushed by tanks during the POW camp objective in mission 2 and these tanks fire more rapidly and more precisely than the other ones - have to strafe in a very specific way to not die in 1-2 seconds; mission 3 is actually a bit easier than mission 2 thanks to this)
Some control/interface issues (a POW won't move towards your ladder even if you're right next to him/her, quite unreliable aiming with some co-pilots like Xavier and it's still a minor issue with Jake - sometimes you'll start hitting something with the machine gun but then the rockets will still miss, strafing is slow and you can't shoot the weapon mapped to B while doing it if you used the the default control method - A button strafing is pretty fast using the "above" method, no crosshair to help see what you're currently aiming at, should've let you cycle weapons with C or the menu so strafing doesn't clash with weapon usage - less of a problem with "above" method, no mini-map, can't show exposed armor crates on the map, no HUD - have to pause to see even health and ammo (you do at least get a "low armor" warning when near death), the map doesn't show non-objective buildings)
Trial & error (can't stop Madman when he's escaping from the yacht and if you try you won't be able to rescue enough people from the yacht itself - have to make two runs to get enough of them and if you didn't the mission can't be finished, finding Jake (best co-pilot) - can use a code to access him though, if you don't save up on hellfire rockets then you won't be able to stop a SCUD launcher before it launches its missile, the game makes it seem like you haven't destroyed the main chemical weapons plant building when you have by having the building make a noise like you're still damaging it and it not blowing up when destroyed - have to take out the silos next to it apparently, impossible to hit the lone soldier on a mountain in mission 2?, shots from off screen - the camera moves so that you'll see more ahead but this can catch you off guard with enemies to your sides (guard towers can shoot from off screen regardless of if you're facing them or not so damage from them is pretty much unavoidable), sometimes there's a rocket soldier hidden in a building who'll fire immediately or close to it after taking out the building - the problem is that they'll sometimes shoot before the explosion clears and you want to not be firing in case there's an item, some ambush attacks with strong enemies such as when you find the secret agent in mission 1, some civilian buildings look just like non-civilian buildings, some POWs are the same color as enemy soldiers - could've had a text message from an assistant pop up saying "this is a POW - don't shoot him" or something, )
Some tedious aspects (the escort segment is cool but a bit too drawn out - have to go grab fuel twice, backtracking for landing zones and for supplies - can only hold 6 people at a time and there are many objectives per mission, some dead space, some tent groups and buildings hold nothing making it kinda tedious to search for items/POWs in them since they also take 5-10+ shots to destroy and the explosion is a bit slow, unloading rescued people is a bit slow (compare it to Choplifter for example), )
Ammo is not refilled after dying
No difficulty options
Can't go back and refuel at the ship you started from nor get fuel as a reward for rescuing people, repeated buzzing sfx when at low fuel - goes on for quite a while before crashing
Can't save excess fuel or ammo for later - if you for example had 80/100 fuel left and picked up fuel barrels then you've wasted 80 fuel
No music during gameplay and the chopper engine/rotorblade noise is somewhat grating
Missions 2-3 have a very similar basic layout to mission 1
So-so water and explosion animations
Some artwork uses digitized photos and it looks pretty bad
The OST doesn't make full use of the sound chip (no PSG or samples used)


Notes:
-The manual does give you a suggested route for mission 1 and info on each mission in the game