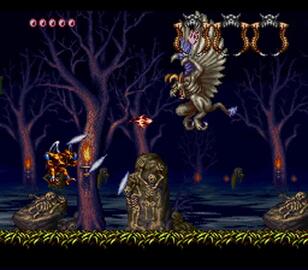 +/- Lacks some ties to the prequels (music, characters, concept), the Gargoyle forms have rather specialized controls, some alternate paths lead down pits (non-intuitive), flight controls are pretty stiff and only allow movement in the cardinal directions until you gain the blue Gargoyle form about halfway through the game, no running jumps

- Only one small town, pretty easy to miss some of the jewels received from bosses; locking out the possibility for better endings from your current game, somewhat slow paced, doesn't really take advantage of the hardware (mostly small sprites, levels have an '8-bit with a face lift' look to them and backgrounds look obviously tiled - smaller tiles also feature intricate details to draw your attention from the pure black of most ground tiles), pretty short main quest, trial & error (bosses, some mechanics), story is pretty much non-present throughout most of the game (save for repetitive encounters with a rival who keeps giving you bad excuses for not finishing the fight), several spells and gargoyle forms aren't needed to beat the game - the level structure and short length adds to the feeling that the Metroid style explorative gameplay was tacked on without much thought, furthermore some items aren't rewarding to acquire since they're just lying around in non-guarded and easy to get to spaces (room at bottom of plant infested tower, room behind wall in burning forest), minor slowdown, can't duck or shoot up, palette swaps on a couple of bosses,