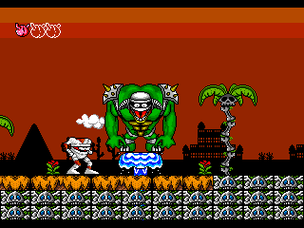 +/- Can’t use some of the potions during boss fights (invincibility, freeze, smart bomb/heat wave), can’t attack upwards (means you’ll need to use a potion instead if you want to keep a good flow going), some shortcuts, boss specific attack potion can be wasted when the boss is invincible or on one of its minions, enemies respawn as soon as you move away from where they spawned, no life refill after bosses, music sounds great despite using only FM (some tracks repeat though)

- No save or password, need to find a hidden item in every third level to progress (there could’ve been a bad ending instead), poor jump height control and low gravity jumps, floaty movement controls (can’t stand still in slopes, slow acceleration), annoying cartoon animation when near falling from a ledge (keeps you in place for a couple of seconds – lethal in the chase sequences), trial & error (boss patterns, leaps of faith, chase sequences), colour palette is darker and higher contrast compared to the original JP release, some tedious sections (vertical platforming, one of the ice stages), item containers don’t refill after dying (means you can get stuck on a boss stage with no life refills/potions/throwing skull), throwing skull would’ve been more efficient/smooth to use if you could call it back manually and aim the throw a bit, no difficulty options except for number of starting HP