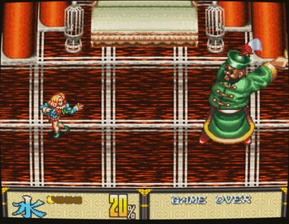 
​
+ 2-player co-op, two different characters to choose from, dodge/dash move (clunky to use though due to a long cooldown time and pause near the end of it), transform into a body builder (apparently your father's spirit), full of national/continental stereotypes from a Japanese perspective, travel across Japan/europe/asia in medieval times, very good enemy variation, expressive characters, mini-bosses, Gremlins 2/Pocky & Rocky style gameplay, minor combo moves (fan shot, two different fireball shots, spin attack - no explanation on how to pull them off?), choose your own path on a world map (see Mega Man, Thunder Force III, Super Mario World), comical (slap stick, quirky, stereotypes), save and ride on dolphins, good art direction overall, difficulty options (no. of lives and hit points only?), four different smart bomb/magic attacks to choose from, some large and fairly detailed sprites, respawn on the spot with same percentage and no. of scrolls

+/- You can easily backtrack and farm items from respawning enemies (you can manually scroll the level backwards in most areas), unlimited continues? (restart the current stage from the beginning, lose scrolls and percentages), no enemy drops if you kill them with magic (or just the water magic?), playable 'queer' characters (the game makes fun of them in a childish way though), unlock bonus stages (the riceball one sucks though), can't carry more than four magic scrolls, somewhat homoerotic (transformation poses, splash screen after beating a stage while transformed), limited energy when transformed (every action except posing costs energy and the percentage meter also replaces your HP until it reaches zero, the meter can be increased in the posing bonus stage), invincibility when posing (useless?), can't change magic elemental or character until you've used a credit or entered the next chapter of the game, the european prince character is the weaker of the two in 1-player (slow rate of fire), you can only move diagonally (not shoot/punch), get knocked over from bosses magic attacks, boss HP is not shown but they do blink when low on health