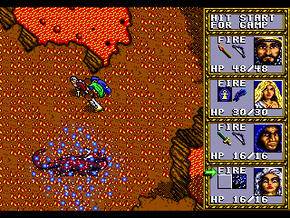 +/-
Mixes in dungeon crawling (stiff, clunky to navigate as you need to go into a separate menu to see the map, no visual clues for fake walls, clunky combat interface compared to mouse-based games)
Shops in the beginning town gradually gain new wares (based on character levels)
The pre-defined party isn't very good
New gear doesn't change character appearance
Funny voices ("Yeah!" on level up)
Positioning and terrain don't seem to matter during combat, auto-pick up when moving over items, limited inventory, lizardman leader just disappears after cursing you (after killing its village)?, rest never gets disrupted and there's no time limit so one can go ahead and rest until healed every time, randomized HP gain on level up, no resurrect spell (need to walk back to town or find a magic pond or tree and there are only one of each in the game), can't sleep when monsters are nearby (sometimes the 'enemy detection' seems buggy), only the character striking the killing blow on an enemy gets the experience points (makes it harder to level up some characters until you get darkness/entangle/petrify spells), the 'well of souls' (in the lizardman swamp) has no effect?

-
​Dungeons reset upon exiting them (respawned monsters plus you lose the map even though the layout doesn't change, items don't reappear though)
No visual or dialogue clues for the small hidden dungeons/caves in the beginning town (wouldn't this be of help for everyone if you knew about them?, there is a vague hint about the cathedral cellar though) or later
Hard to tell how far you can move in a turn during combat (it's forgiving though so you can move back if you change your mind)
Fairly easy to find the overpowered lightning wand early on (and grind a few levels with save/load so you don't lose it)
D&D stats are pretty unintuitive (see Baldur's Gate review)
Lack of direction past the beastmen camp quest in the beginning, tedious rolling for stats during character creation, thieves are underpowered?, poor colour choices and odd perspective, somewhat slow movement outside of dungeons (no teleport spell or speed boots but there is a caravan in town that takes you to visited areas for a price), some loading time after battles, so-so FM sound design (loud and mostly annoying sfx, no PSG used for the music), slow transferring of items between characters, your characters are ridiculously bad at hitting enemies in the beginning, apparently some battles are much tougher in some game sessions (not sure what causes this), cheap hits in dungeons from traps, clunky to drop items (need to use the options menu) or memorize spells (need to rest to change which your selection), tedious to move through cramped areas like forests, ridiculous backtracking through a large dungeon + unmapped swamp area when exploring past the beastman caves, overpowered ranged weapons in dungeons (easier to hit and higher rate of fire), the 'azcan' (Aztec) temple (tons of traps (pretty much need a thief here) and several floors of mazes to go through (twice since you need to backtrack without a revealed map!), the king eventually bans you from the city until you finish the last (?) quest (means you can't buy some of the best stuff so don't talk to him at this point, you should also not finish the next part of the game until you've bought everything you want from town as it will be abandoned after the volcanic mountain quest), can't drink potions via the menu (need to equip it, leave the menu, select the character and then use it on a chosen character - pretty tedious), battles never get very complex (enemies almost always hit your leader first when fought head on, enemies aren't very sneaky and don't use the best spells, enemies sometimes don't react when attacked from afar), some useless spells, unusable gold in the elven underground, Specter and Wraith enemies (can drain levels permanently)