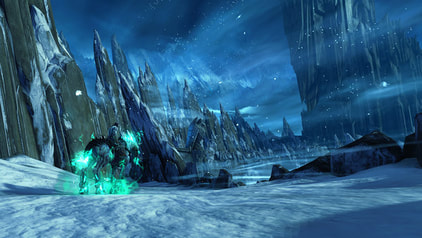 ​
+
Very nimble avatar (as long as you don’t stray from the intended paths too much; PoP/Zelda-style movement with beat ’em up/hack ’n slash-style combat)
Two skill trees that can be reset (harbinger and necromancer - can mix between the two)
Quest log
Varied and detailed environments, pretty good art direction (very nice environments; characters look similar to WoW but more metal)
Horse riding (can be summoned/desummoned at will but only in open areas, can fight on horse with your first/main weapon though it’s rather limited and the horse is unsummoned if you get hit)
Satisfying feedback in battle and when jumping around
Decent voice acting
Lock-on and strafing, alternate weapon mapped to the RMB/alternate attack button, very good camera controls overall
Some boss characters appear to mock you as you’re moving towards their lair
Difficulty (three levels) and control options
Graphics options (resolution, shadow quality, v-sync etc), unintrusive tutorial messages (with a few exceptions where the game pauses), several optional areas and dungeons (soul arbiter maze, arena (the crucible), shattered forge), less of a difference between dungeons and their preceding areas than in Zelda, can speed up dialogue on a per sentence basis (and without silencing the rest of the scene), dialogue choices (doesn’t seem to affect the story but lets you ask NPCs about quests and lore), can see a piece of equipment’s stats before picking it up, fast travel/teleport to visited locations (creates a waypoint where you were at if you teleported from within a dungeon; can’t teleport exactly to the spot you’ve picked though – for example picking the smithy puts you in the middle of the town location instead), can toggle between automatically picking up all loot or just gold, air juggle combos, very short loading times between sub areas (none when booting up or when entering dungeons), great swimming controls, very good animation and combat effects, new gear shows on the character model in-game, overall better color use and stylization on PC compared to the console versions, higher framerate on PC (60 vs. 30 fps?), some memorable characters (vulgrim/random item salesman, thane, alya, ), some cool bosses (drenchfort), fast climbing and block pushing, can buy back sold items in a shop at reasonable prices, some ”off the map” areas, upgrade certain gear by sacrificing other gear in your inventory, some memorable locations (outside gilded arena), some good puzzles (interdiction (use dead souls/ghosts for team switch puzzles) - later switched for soul split (temporarily split your avatar into two avatars that you can switch between, portal puzzles, time travel puzzles (only used in one dungeon though)), travel to a dystopian modern day setting near the end, fight alongside NPCs in some short scenes, elemental attacks (one element per weapon only) and enemy affinities, basic weapon crafting (possessed weapons can be "fed" other weapons to level them up and add effects like increased chance of a critical hit), can choose between new game+ or going back and finishing side quests after beating the game, unlockable dungeons/campaigns separate from the main game (Deathinitive Edition)

+/-
Can’t use the first special move to air dash
Auto-respawn at the beginning of most platforming/climbing segments if you fall down a pit (can’t be triggered at will for example when there’s water below, lose a little bit of health per fall)
Combos are explained in menus rather than being taught by NPCs and you have access to quite a few from the get go
The game expects you to map special attacks/wrath abilities (like teleport slash) by mapping them to hotkeys but it doesn't seem to work (using the wheel menu is fine though and it pauses the game giving you some breathing room)
Teleport slash can be used to cross some pits but only moves you half the distance if there’s no enemy to hit with it
Can’t roll off of platform edges
Plenty of semi-useless loot (only good for selling)
Can’t turn off the autosave (would’ve let you exploit the random item salesman though – the game saves after each purchase)
No throws or grab moves (except for the finisher on E, heavier weapons can also send smaller enemies flying when killed)
Guns (doesn’t quite fit with the setting until later on, very weak vs. Enemies, infinite ammo for the first one)
Can’t dodge out of combo finisher animations, linear structure but with a lot of optional areas to explore, less stylized visuals than in the original version, limited inventory (pretty big though), can change difficulty level in-game but the rewards from the previously chosen level will stay the same, seemingly static difficulty if you stick with one setting (doing things out of order can make some parts kind of easy), many fetch quests, enemies in retreat mode can't be damaged, few dodging enemies, it's generally better to explore for new items rather than to buy them, minor QTE element (you have a (modifiable) chance of being able to perform an execution/insta-kill move on regular enemies and for scripted parts of certain boss fights it's required) - you only need to press E near the enemy, invincibility time during teleport slash?

-
Invisible walls and occasionally sloppy/inconsistent hit detection around walls and platforms
Clunky interface at times (can’t make notes on the map or in a journal, no hotkey taking you straight to the map screen? (it’s a sub menu in the stats/inventory screen instead), the game shows an odd arrow symbol instead of the E key when near something you can interact with, browsing shops (need to click the scroll button before using the keyboard to browse up and down, can't switch sections with arrow keys), can’t zoom in/out on the map screen, can’t click a location on the world map to center on it, goes back to the top of the moves list after mapping an action to a new key, on the WM you need to align a selection box to a location to be able to fast travel/teleport there), no backwards wall jump control (could’ve been used for sequence breaking), only one save slot per game? (auto-save can also trigger at a bad time causing minor backtracking), no message/dialogue log?, odd FP look when clinging to a wall and looking backwards (auto-moves to a diagonal over the shoulder view unless you keep moving the mouse to where you want to look which makes it hard to get an overview of some areas)
Simplistic and melodramatic story
Rushed end-game and ending (pretty short final world and no clear indication that you're at the end of the game before opening the door to the champion, poor sense of resolution (you don't get to see the effect of Death's sacrifice), final boss isn't seen at all before facing him and his motives aren't explained)
Some trial & error (the game auto-saves after buying from Vulgrim, a few dungeons block the fast travel/teleport move, finding Oran's body parts and the bloodless enemies, can get stuck at one of the city of the dead puzzles, some pits where it looks like you can jump to a lower platform and some where the jump is very tight, the game doesn’t tell you about gear switching before the guardian fight, crypt skeleton/deposed king counter attack and the scribe's counter attack, inconsistent wall climbing (for example the four floor elevator puzzle in the kingdom of the dead where you should be able to jump onto a wooden ledge as the elevator is moving but can’t))
Sometimes insufficient local area maps (due to not being able to get a good overview in some rooms and them being 2D) - often the obstacle to progressing or finding a chest comes from it being hard to notice some small detail instead of having to figure out a logical problem
Don't get to choose whether to save mankind or the nephilim when sacrificing yourself at the end of the game
Sometimes there’s a disconnect between dialogue choices in the dialogue menu and what dialogue they actually trigger
Rolling forward three times in a row causes some pause in your movement (need to stop rolling for a step or two between every other roll to keep moving quickly)
The crow often doesn’t show the way properly (but you’ll generally have a waypoint on the map and at least it’s always quiet)
Dead space (areas where it looks like you could use the horse but can’t for some reason (”this is no place for a horse” – the hub areas, eternal throne/gilded arena)), pretty low draw distance (with sudden pop-up) on some shadow and lighting effects, more limited vertical aiming/targeting in aiming mode (can look almost straight up in default mode – sometimes this limit is used for puzzles though), sometimes can’t skip sentences during dialogue (rare although sometimes you'll also skip a bit more than you wanted to if the sentence is followed by a scene) and in-game cutscenes (fairly common though the scenes are pretty short), slow stone golem movement and ceiling climbing (vines), crappy camera zoom during the guardian fight, can’t see some treasure chests on the world map (near the first vulgrim location), somewhat repetitive level design at times (the TPS segment on Earth, the foundry, some of the kingdom of the dead dungeons, parts of the spire), the hookshot is OP when facing just one or two regular enemies (knocks them over and moves them towards you), the dead souls (used for switch puzzles) move too slow, your avatar sometimes pulls off moves during cutscenes that you can’t perform during gameplay, no enemies around when climbing or swimming (makes the world feel a bit artificial), there are many short obstacles that you can't climb unless there's a special ledge on them (feels silly since your char is very nimble in general and it often wouldn't break anything if you could climb them), sometimes uneven difficulty (easy TPS segment on Earth, sometimes you find a lot of potions and other times (Psychameron in kingdom of the dead) barely any, tough Scribe boss and rising lava segment, pretty easy final boss), some plot oddities (can't talk to the uncorrupted angels about Archon after finding out about him and can't face him by taking the teleporter to him from Earth - have to take the path from the bottom of the tower), the insta-kill move for smaller enemies is somewhat inconsistent?,

​
Bugs:
-Hit detection bug in the guardian boss fight (can get stuck inside its foot)
-Enemies sometimes get stuck in retreat mode (they can't be damaged in this mode)
-Sometimes crashes when alt tabbing to desktop (Win10, GOG) or when in the crucible/arena
-The last cutscene vs. the champion of corruption sometimes gets glitchy (locked camera angle, repeating grunting noises by Death - continues in the following scenes which ruins the mood)
-Doesn't properly show buttons when using a controller (Win10, GOG)
​