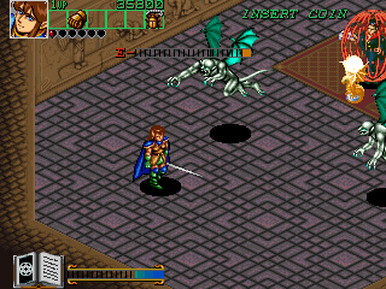 
+ 5 different playable characters (knight - stronger physical attack? and disease immunity, wizard - stronger magic, elf - higher movement speed, dwarf - confusion immunity and boomerang projectile attack, bard - poison immunity and long reach), D&D-inspired world and minor gameplay elements (status effects, item inventory, spells, classes), some large (even larger than in DS1) and detailed sprites, pretty nice boss death animations overall, 2-player co-op, difficulty options (4 levels, coin worth (up to 6 credits), starting energy per life (5), magic gauge fill speed - 4 levels), character select after using a credit, decent cutscenes (stills+text, in-game scenes) between levels, strength/speed/defense/temporary shield power ups, some good bosses (first dragon, desert witch), more interesting and varied levels overall, pretty good art direction (except in cutscenes), 8-way aiming and movement, temporary transformations (same as in DS1), later bosses appear to taunt/intimidate you during some levels (sometimes the current level's boss), drop current items upon death so that you get a chance to pick them up (more even difficulty), mini-bosses in most levels, a bit better balanced boss HP on Normal (up until the second to last level - final boss takes longer to kill than the one in the prequel!), decent voices and hilariously cheesy cutscene dialogue, adds a basic combo attack for the elf and bard (mash the button for a stronger and wider attack to activate that is repeated for as long as you can keep mashing; the knight instead spins his morning star if you hold the button down)), stereo music with better FM synth (pretty good for YM2151),

+/- Rare speed upgrade (you now get one after using a credit though (along with armor and gauntlets), pretty short levels, the game cycles through the various transformation spells instead of letting you pick directly (makes you have to wait for the one you want at times, minor challenge added though in that one slot is a random effect which can be negative), respawn on the spot even after continuing (no chance to go back and pick up items), no shops, no hub map or level select screen (does show a vague world map of your location at the start of each level though), no puzzles (could've made you use the transformations in specific ways), can't jump except when in boulder form (not useful for reaching new areas - just used as an attack), more colorful and anime art direction this time around, transformations last almost half as long as in DS1 but are a bit more powerful (you are also invincible during them) and can be used against bosses (does little damage though), only one life per credit and no way to increase them, partial HP refill after bosses and from statues (rare?), no auto-fire,

- Loose scrolling (you’ll quickly reach the edge of the screen with boots on), no significant difference besides boss’s HP on Easy, fairly easy to miss the item dropped by a beaten boss or your own dropped items if you died at the same time as it did, still no dodge/block/strafe moves (can't avoid some attacks at default speed?), no ninja, can't move backwards in levels, some tedious elements (more enemies take more hits to kill than in DS1 - the tomb with mummies gets really annoying in this regard, unavoidable paralysis vs. the stone golems boss, respawning small flying enemies that attack from all directions), sfx are too low overall compared to the music, uneven spritework quality at times (characters look halfbaked in the later cutscenes), pretty short (5 levels - seemed even shorter than the prequel), sometimes unforgiving hit detection (first boss's flame attack), some bosses have at least one pretty inefficient attack that's easy to dodge, no advanced combos or alternate weapons, in-game dialogue text that blends a bit with the bg (should've put a message box behind it), cliffhanger ending and you don't get to fight the reappearing villain from the first game (can't get a better one?),