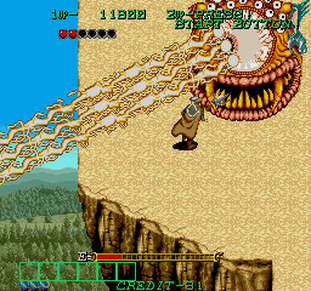 +/- Speed upgrade (it's pretty rare though and it’s both on a timer and lost after losing a life), pretty short levels, the game cycles through the various transformation spells instead of letting you pick directly (makes you have to wait for the one you want at times, minor challenge added though in that one slot is a random effect which can be negative), respawn on the spot even after continuing (no chance to go back and pick up items), no shops, no hub map or level select screen, no puzzles (could've made you use the transformations in specific ways), can't jump except when in boulder form (not useful for reaching new areas - just used as an attack), some bosses have specific weak points (usually the head or mouth – not hitting it means they take a ton of hits to kill on normal, should've been all of them or at least they could've tweaked the ones without one to not take so many hits)

- No dodge/block/strafe moves (can't avoid some attacks at default speed?), some tedious elements (final boss's spin attack, can't cure polymorph or poison and there's an annoying sound during some status effects, several bosses and some enemies take too many hits to kill on Normal, takes a long time to beat most skeletons since they're invincible while knocked down), pretty short (5 levels), "get MP" sfx replaces the death sfx for regular enemies, sometimes unforgiving hit detection, some bosses have at least one pretty inefficient attack (first two dragons), some transformations are very situational, can't use magic during main boss fights, no combos or alternate weapons, sometimes retarded AI (the minotaurs), somewhat loose scrolling, mono music and the FM could've sounded a bit better considering they're using two chips (YM2203 and YM2151), same music in levels 1 and 3


Notes:
-Not sure what the ring item does, nor the small pillars with a gem on top