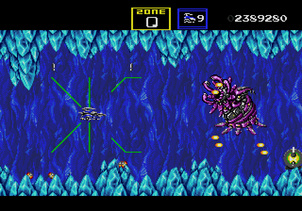 ​
+ Many levels of fire power, good bosses after the initial 2-3 zones (some with multiple phases, some large sprites), somewhat comical (robotic sea life bosses with odd names, sometimes odd music), good explosion sounds for smart bombs and bosses, mini-bosses, upgradeable shield power up (three levels and up to ~6 extra HP for the ship, not sure how it works but it seems you have to lose your current shield to pick up a stronger one or you'll keep the current level one), point bonuses for killing entire ship formations, multiple paths (7 different end levels, 28 levels in total), the soundtrack makes pretty good use of the sound chip, difficulty options

+/- Two different ships (they end up the exact same fire power-wise but the blue one always starts out a bit stronger after dying so it's essentially an easier game), can't keep smart bombs for later (they tend to float slowly across the screen and will activate as you shoot them), can't manually turn your ship around unless you're fighting a main boss (would've been useful in a few spots and if designed around it would've helped with the variation), if you shoot power up containing enemies when they're close to the left edge of the screen then you're very likely to miss the power up (it floats off screen)