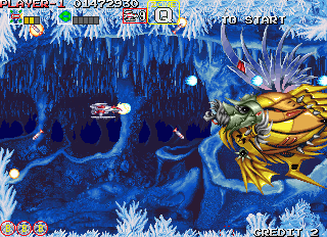 -
No speed adjustment (your ship is too slow to dodge some things without memorization)
Heavy trial & error
Very hard to survive if you lose your firepower before a boss
​Minor slowdown
Steep difficulty curve
Reused backgrounds and enemies in many levels, somewhat muffled sfx, no alternate weapons (though the beam changes when you're upgrading), a lot of small and non-descript enemies that blend into the background (desaturated colors), somewhat tacky level transitions (fade effect)