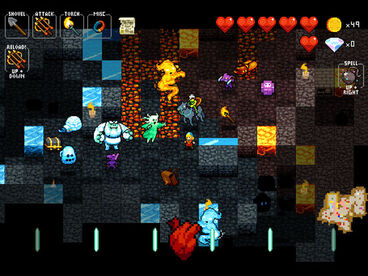 DLC:
Unlockable harder modes - hard mode (harder "all zones" mode), no return mode (means you can't move back to the tile you were previously on or you take 0.5 HP damage), randomizer mode (all zones mode with randomized enemy attributes), mystery mode (all zones mode where enemies and items are replaced by question marks - can tell them apart by their hearts and sfx), these all have a seeded version as well
Unlockable phasing mode (move through walls instead of being able to dig, most enemies stop moving while inside a wall tile)+a seeded version
Zone 5 added with new enemies and mini-bosses
Familiars (dlc) that follow you around - can have up to four at once assigned to one adjacent tile each
Earth spell (3x3 level 1 wall around player) and bat transformation spell. OP in that it can kill bosses in one hit
Magic food variants - like gluttony charm
3 new characters
3 new bosses (2 of them character specific)
Grenades
Conduit tiles (zone 5) - charges you up so that attacking a monster creates a chain reaction to connected monsters
7 new main weapons

+/-
While there is an easy mode/dance pad mode (start with better items, fewer enemies; only a bit easier though), it's for zone 1 only!. If you're lucky and find the peace ring then that does similar effects+the game spawns the weakest version of the mini-boss on each floor (the ring of wonder is even better but you have to create it from a negative ring item)
Real-time elements take some of the strategic thinking out of the gameplay and makes some situations much more overwhelming than they would've been in a standard rogue-like (some items and most shrines have both pros and cons attached to them and this can also be tricky to pick up on in the heat of the moment). Can pause whenever you want but not view the in-game visuals at the same time
Auto-mapper mini-map (kinda small though, can also buy a full map which lasts until death)
Time limit - get thrown down to the next floor/level when a song ends (can't see when it ends so you have to learn how long the songs are; most are around 2m50s-3m long though some are around 2m40s and 5-2 is 2m34s long). If you hadn't taken out the mini-boss of the current level then you are dropped into a small room with that mini-boss and some enemies in it. You also lose your multiplier as you will miss the beat from falling down. Some chars (Aria, Coda, Dove) even die from this
No gold, diamonds or items are saved between runs - if you were saving for something that cost 12 diamonds but found 11 you can only choose to buy something else or lose them all. There's also no stash or pot item for keeping one or more resources for the next run (see warehouses and warehouse pots in Shiren the Wanderer)
No health refill when moving between floors
Can't get past bosses by surviving until the song ends
Enemies can move to the beat regardless of if the player moves or not unless playing as Bard
Randomized bosses as well up until zone 4
Limited but temporarily upgradeable item inventory
Can't sell items at regular shops - only pawnbrokers
Can end up in a room with four arrow tiles surrounding a weapon meaning you either have to wait for the song to end or use a bomb to get out
Lenient time window on beats (half a beat)
Can skip every other beat (enemies will still move) but can't stand still and keep the beat while not tapping any button unless you have the ballet shoes (they let you keep the multiplier after missing the beat+gear that would break from missing the beat) - have to be moving with the beat (or beat a drum) and therefore repeatedly tap a button at all times during gameplay (could've let you hold a button to keep it while still)
A seeded Diablo-style easy mode could've been fun (drop all gear where you died and can then get it back in your next run except prior floors to where you died are reset and the loot is randomized)
Can't throw consumables at enemies to transform them (Shiren the Wanderer)
You can find a regeneration ring but it only heals 1 HP each time you reach a new floor
Shrine of rhythm used to max out your multiplier instead but also kill you if you missed a beat
Can end up fighting the same boss in later zones when you do single zone runs (however their minions are different)
Gold could've been converted to diamonds at a rate of 1 diamond per 200 gold or so to not let it all go to waste when dying
Cutscenes are made up of VA and artwork stills with minimal animation
A blood bow or crossbow is pretty OP outside of a couple of boss fights (an upgraded bow+crown of thorns headwear even more so). Phasing ring+phasing dagger seems OP but it's a rare combo to get

DLC:
Buffed ballet shoes in that the groove chain multiplier will max out after killing one enemy instead of five
Nerfed winged boots - no conduit charge

-
Weird default controls for using items, spells and throwable weapons - have to press two directional buttons at once (can map these to separate keys and then buttons instead but have to use JoytoKey and the like and then there's an issue with the controller pressing twice when unpausing, if you don't use JTK then you can't map confirm/enter to a controller button)
Starts off very hard and expects you to buy extra health and other buffs as well as the chance of better items to appear with diamonds collected in each run (some die to win at play)
Uneven difficulty (sudden attacks by minotaurs or red/blue dragons or getting dropped into a small room with the mini-boss and some other enemies (trapdoor fall or if the song ends before taking out the mini-boss of the current floor) can screw you over in seconds, sometimes get really good items and/or a lot of health and sometimes almost no health, shop items can be too expensive to buy on that run - can't backtrack to previous floors, difficulty spike at the final bosses (two in a row), can end up fighting one of the harder bosses (king conga) earlier due to them being randomly picked, spike at level 3-3, ogres and mommies (zone 4) are easier than red and blue dragons though it is possible to face the latter in zone 4 as well, nightmare horses are generally easier than most of the other mini-bosses, overly random and limited diamond dealer item selection)
Heavy trial & error (the tutorial explains almost nothing; multiplier mechanics, boss and various enemy patterns, various items and shrine effects, have to place bombs to the left of urns or opening them this way destroys the item within, need to be dealing 3 damage to open crates and barrels with your main weapon, shrines drop items if bombed, etc.)
Can't use the lobby shops for the all zones mode - the upgrades are all unlocked but you can only start with default health (makes diamonds redundant, have to find heart containers in item containers throughout the run). All zones mode is also harder than playing the individual zones in two other ways: shop items are much more expensive and tougher enemies are more common even from the first level onwards
Gear and money don't carry over to the next zone if you play the game one zone at a time
Having to stay on beat to move can get a bit tedious when backtracking to a shop
A bit short at 12 levels in total (divided into 4 zones/themed areas)
When attempting one of the advanced techniques training levels the game switches out your character automatically (to the bard, which doesn't need to follow the beat). You have to go reset it in the starting room (couldn't do it via the options menu) and you can't play these as the default character.
Have to pay to train against most mini-bosses and bosses
20+ seconds of loading when booting the game up
Can't throw away an armor/headgear/ring item, only replace it with another one
Can't turn off the vocal elements of songs (annoying but only happens when in or near shops)
Can't hold onto the default dagger for switching back to it in case you get a bad weapon for the given situation (for example the whip or nine tails can be bad in combination with the dash ring)
No invisibility spell or consumable
Can't lay traps
No digging animation for the player avatar sprite and no unique death animation for bosses
Very rushed last two cutscenes and the story ends on a cliffhanger (have to beat the game again as Aria which is bullshit hard)
The OST only uses 4/4 time signature besides if you activate a shrine of rhythm, at which point the 8th beat is removed (meaning no one moves on that beat), and during the King Conga boss fight which does the same.
No elaborate dance moves for stronger attacks or other bonuses (such as moving in a certain shape or going into a temporary mode where you press various buttons and button combos in a row)
No freestyle mode à la Parappa the Rapper
The lack of a countdown timer when unpausing can make you lose the beat? Seemed fine to me though given the lenient timing
Can't throw a weapon while wearing jump boots as their toggle replaces the button/button combo for throwing
The wallpig trap (shoots fireballs) in zone 4 can end up placed in front of a shop door

​
Bugs:
-The first few times that I started the game it would just crash after trying to load the main menu. Seems I have to let the intro start, press a button, then wait for a prompt or it crashes.