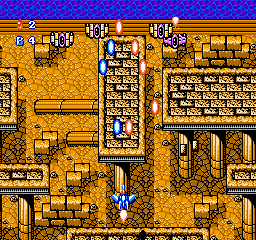 ​
+ 2-player, difficulty options, super mode (invincibility and powered up shots for ~30 sec, pick up power ups to keep it), bombs, some innovative gameplay (warps, moving obstacles), some destructible set pieces (like in astro warrior), good bosses overall (multiple forms), mini-bosses, good variation, great art direction (sci fi egyptian theme), resurrection on the spot when dying and you also recieve a speed power up (though this can fly off screen if you revive close to the edge) and 3 new bombs, like in some Aleste games you lose your upgrades instead of dying when taking a hit