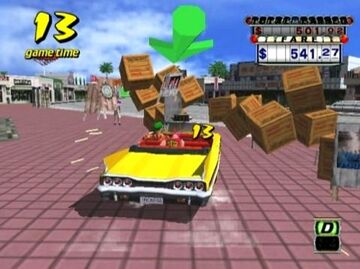 
*Normal
**Some of the challenges


+ Arcade and original mode (different routes and starting location), crazy box/challenges mode, drifting (Daytona USA) and dashing, over the top physics with exaggerated jumps, sometimes funny voice acting (customers get mad when you play poorly and excited when you do well), can drive on rails and subway rails as well as underwater (no physics change underwater though), bonus points from drifting and dodging cars, can quickly restart any game or challenge (can't do it after finishing a session in the main modes though - gotta pause before it's over to do it), four different drivers (various differences which are sadly hidden - see below), setting is based on modern day californian coastal cities and features locations like Pizza Hut, 60 fps overall, better sound quality and overall framerate than on PC (even the later Steam release, worse draw distance and res though), fairly large city for the time (pre-GTA 3), honk button (banter with customers instead if one is in the car), many loose objects to run into, can break almost instantly by dashing and then holding reverse while breaking (not explained anywhere?) but it seems not to work as well when driving a bit further before breaking and achieving too high a speed, various shortcuts, unlockable challenges and "bike w/ cart" vehicle (beat each challenge - fairly hard), good sense of speed if you dash a lot, difficulty options (time and traffic settings - 7 levels each + default timer setting, expert mode via code), control config, "alternate starting point and some locations" mode (cheat code), FP view mode (cheat code)

+/- The crazy box mode is also the tutorial for certain mechanics like drifting and dashing (if you don't try it and check the tips in the menu you won't learn about drifting and dashing), licensed music in-game (Offspring and Bad Religion), very hard "arcade rules" mode (you don't get enough time when picking up customers), no infinite time mode? (10 mins is max), random element to most customer destinations (most of them want to go to the same location early on, you can generally choose between a couple of customers standing in the vicinity of each other if the one you were going for isn't active or changed their destination while you were doing another drive but you have to memorize them to get what you wanted) as well as traffic, if you drop a customer off near another one you'll automatically pick up the other one (can be bad if facing the wrong direction or they want to go to a location you're not prepared for or if you stopped so that they have to walk for a bit to get to your car (the timer starts as soon as you stop instead of when they get in the car)), rather high difficulty in some of the crazy box challenges, no penalty for running into other cars, no damage to your or other cars (Daytona USA had it), can only pick up multiple customers in some of the challenges, sometimes forgiving physics when driving into objects but sometimes not (poles, some cars/trucks can fall over and hit you twice in a row at times), weird how the punk rocker tells you to be more careful, have to get S rank to see the ending (pretty hard on default settings), a bit unforgiving in the "arcade rules" modes how customers think you suck if the overall timer is near the end even if you did great on their drive (means no time bonus),

- No easy mode for the arcade rules modes, trial & error (sometimes there are broken cars along the side of a road, the route for the last challenge level - no arrow or map, can't tell which way a customer wants to go before picking them which leads to lost seconds turning around, switching to reverse makes you stop faster when breaking, no city maps (could've used the VMU), and the arrow isn't reliable enough (tends to point forward until just before a curve, sometimes points right into a wall) - sometimes the passenger's comments and the arrow conflict as well (the passenger might say take a left when the arrow points forward or say it when there's just a wall in that direction)), inconsistent and sometimes glitchy physics (can get stuck in a weird way in the bowling challenge, can get stuck with the corner of your car on a wall when making a sharp turn in one spot and on the hospital wall if sliding into it, can get semi-stuck on various objects or walls when turning at slow speed and sometimes while drifting, can (rarely) bounce off of the Levis store sign like 20-30 meters backwards), the timing on dashing is too tight (I can pull it off about 8/10 times in emulation) and if you screw up under pressure you might start moving backwards since you have to switch to reverse and back to use it, drifting is a bit awkward compared to Sonic All-Stars Racing for example (need to quickly change to reverse and back, weird kickback from the ground when you drift deeper, pretty easy to oversteer), few songs and you can't change the song manually (can turn off the music to listen to something else though), in the bowling challenge the commentary sometimes starts a negative comment and then switches to a positive one as a "strike" triggers, only one city?, no career mode where you can buy new cars or parts and do challenges within the main-game, no instant replay feature, draw distance could've been a bit better at times, some framedrops in the main modes (pretty severe when going downhill near the beginning), no multiplayer, somewhat worse textures and draw distance than in the ARC ver., somewhat slower than the ARC ver.?, tighter breaking while in reverse in the arcade ver.?, unskippable bootup logos, some of the customer comments are annoying and non-sensical in the challenge levels, uneven difficulty in the main modes (some routes are definitely harder and less profitable than others),

Notes:
-Driver differences (some info might be inaccurate?): http://www.crazytaxi.net/drivers.html
-Arcade ver. was released in 1999
-Unlockables via cheats: https://gamefaqs.gamespot.com/dreamcast/196990-crazy-taxi/cheats
​