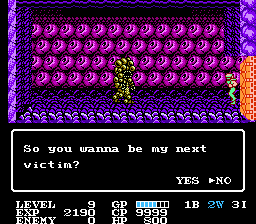 ​+
Platform Adventure/MV/ARPG elements (large maze levels, exp point leveling and your main weapons also level up, some ability gating and backtracking to ability gates with new abilities, some NPCs, basic trading with some NPCs)
Pretty good enemy AI from the get go
Decent intro and ending (some animation)
Temporary flight via the jet boots (costs energy/CP)
Alternate dimension theme (new backgrounds, music and enemies)
Can destroy most enemy projectiles after getting the cosmo power upgrade in level 1
Temporary robot suit upgrade (fill up your GP bar (you keep it on until the bar is completely emptied), after you get the auto-protect "spell" you can summon it instead though it's fairly expensive, similar to Robocop however the first Cosmo Police game also had this and it's from 1985) - increases defense
Shows bosses' health bars
Good initial enemy variety
2+ mini-bosses per level
Some abilities/tools gained that are used to progress (jump boots/cosmo boots are needed in level 2 at one point, torch/eye to see in the dark in some rooms of one level, cosmo suit to move underwater without taking damage, late game jet boots let you fly temporarily with each use, some special weapons and crystals open new paths/destroy walls (these all cost energy/CP to use), some gating via mini-bosses - the large computers in certain rooms)
Some decent humour (the lizard mini-boss that asks if you're Galivan and then says "oh, I must be mistaken" and leaves if you say no)
Some pretty large and detailed sprites and some multi-jointed ones
Some cool sub weapons (boomerang, )
Some teleporters such as the NE one in level 4 can be used as minor shortcuts once you know where they take you
Some decent bosses

+/-
Linear overarching structure (sometimes partially non-linear levels however you'll generally have to get all items in a specific order - destroy the defense computers to open levels up completely+get the "path revealer" item(s) to be able to get the new weapon in each level (needed to be able to damage the level's boss), have to do level 2 in a specific order besides getting optional info from some NPCs, etc.; can skip the eye in level 3 though it is harder, can probably skip getting the password letters in level 6 if you know them though you'll be underleveled)
Can't backtrack to previous levels
Auto-save feature (loading a save makes your exp go down to the minimum for your current level however)
No checkpoints - start back at the entrance to an level and current level exp is reset+you lose your CP (ammo/money)
Ammo-based alternate weapons (ammo capacity is increased as you level up)
Have to hit enemy drops to pick them up and using a sub weapon doesn't work
Weird how you can step through a barrier from the other side and then still have to destroy it from the first side
Get hints from NPCs - they tend to act like pieces of a manual or guide rather than actual people though
Can't attack while moving nor move while crouching
Enemies respawn when re-entering a room
Enemy drops disappear after about 8 seconds
Levels become a lot easier as you level up your main weapon and you will do this as you're forced to grind for ammo anyway. First level becomes a lot easier after getting the cosmo power upgrade
Alternate weapons don't level up - makes a few parts kinda tedious
Constantly respawning enemies in certain rooms of some levels (annoyingly they tend to stop dropping items when backtracking)
No new enemies appearing when backtracking through a level
Low rate of fire for sub weapons (one projectile on screen at a time) and you can't use the main weapon at the same time like in CV
No melee blocking (Zelda II), dodging or attack combos (Double Dragon)
No downwards attack besides the capsule bomb
Can hit enemies through platforms

-
No in-game map
Some control/interface issues (high default jump height, some delay before falling and then you fall really fast, can't speed up dialogue text - a bit slow, fall faster after attacking in mid-air, enemy drops can get stuck in walls, can't tell when barrier shield and blade power buffs are active, minor movement delay if you fall further down than you jumped up, can't manually cancel flight)
Some tedious aspects (certain enemies never drop CP/ammo at all, rather spongy bosses unless you grind a ton, grinding to power up your weapons plus for ammo and HP (some spongy enemies such as the brown snake-like ones in level 1, mini-bosses before main bosses), no HP restoration when leveling up or from mini-bosses and enemies only drop something about 40% of the time, various one-way doors and teleporters between sub areas, enemies can drop items that you already have a full stock of, getting your main weapons to max level takes forever and new ones always start at the lowest level, have to switch back to the first sub weapon to open the orange doors/barriers - sometimes also back to the first crystal to open up a path (later crystals and weapons should've been "backwards compatible"), your current main weapon won't gain exp if you killed an enemy with the sub weapon instead)
Some difficulty spikes (fairy mini-boss in level 1, level 2 boss, level 4 main boss, etc.; unless you grind a ton) and dips (level 2 lizard/dino mini-bosses, level 4 flying mini-bosses)
Some trial & error (sometimes you won't know where a new path opened up after using a crystal and sometimes it's hard to tell where you're supposed to use a sub weapon to open a new path (the game can also be a bit anal about hitting exactly the right spot), floor trap in level 2 which makes you take a long path to get back to where you were and it's hard to avoid even if you know where it is (need to get back up and use the capsule bomber to get to the cosmo boomerang at one point; another one at the end of level 4), using the computers to go into the alien dimension - jump and A+B, some trap rooms that make you kill all enemies to get out, the fairy NPC in the first level is actually a thief+boss so you're supposed to say no to the trade, vague clue for getting to the SE part of level 3, warp maze at one point (one in 9 chance to take the right path and the others make you backtrack))
Misses the opportunity to use the alternate dimensions for puzzles
Some unavoidable hits if you run out of ranged weapon ammo and at the level 3 mini-boss past the dark room and some that can't be avoided at all
Some enemies don't react when shot at from afar
Re-uses more than one enemy type already in level 2 (some re-used enemies have new attacks however). The computer mini-bosses also behave the same after the second one
Some backtracking (if you fall into the water in level 4 when going to the boss or the NE room, level 2 makes you move back and forth several times and level 4 makes you do it a couple of times for example - one or two more teleporters or alternate dimensions exits that took you where you were supposed to go next would've been good, level 3 makes you go through almost the whole level to get a vague clue about how to proceed early in the level, out of the alternate dimension sub areas - generally not the whole way but the exits are placed in another spot than where you entered and you have no map)
The level 3 boss can get stuck in place letting you hit it safely a bunch of times
The main weapons all function exactly the same and have the same short range