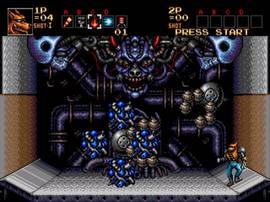 ​
+
Intense and varied
Multiple paths & endings
Somewhat humorous (see secret arena, goofy robots, dialogue, etc)
Great bosses overall
2-player co-op
Can switch between moving while shooting and stationary aiming (hold B and press A)
4 playable characters with different weapons (as well as double jump + smaller sprite for the robot)
Japanese version gives you a lifebar (however, it is also a harder (some different boss patterns) game than other versions)
Mini-bosses (the game is close to being a long boss rush)
Technically impressive (very fast and intense with almost no slowdown or flicker)
Slide move (fixed length, dodges most attacks), fast paced, nearly all weapons are useful (enemies have different weaknesses)

+/-
Somewhat forgiving hit detection, 3 HP life bar in the JP ver. only (has been hacked into other versions since then)

-
Extreme trial & error (boss patterns, fast attack without warning, at one point you are supposed to stand on a boss)
Short stages (and some dead space where there could've been enemies on the train/mutant general path)
Hard to tell what will hurt you and what won't when fighting bosses
Awkward climbing controls (you have to face away from the wall/ceiling and press jump to let go)
No moving while crouching (you'll rise instead, easily taking hits)
Some tedious bosses (autoscrolling tunnel boss)
Unbalanced characters (robot rocks, wolfman blows?)
No difficulty options
Only 4 credits and 3 lives per credit in the Euro version (same as japanese but without the lifebar)
European version was censored (original version involves humans being eaten or mutating into monsters and lets you join the bad guys at one point)
​You can't slide while riding a bike on land but you can do it on water