Conquests of the Longbow: The Legend of Robin Hood (PC, 1991) 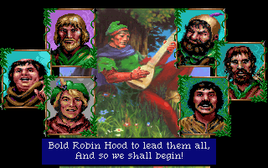 +
Well written dialogue, good variation, good attention to detail history-wise, some decent humour (british, perverted, sarcastic), save feature (anywhere outside of a dialogue cutscene) with plenty of slots, adjustable difficulty for action sequences (set it to lowest and they are skipped), ranking system (affected by various optional things like giving money to people or how you deal with strangers when taking their clothes, three alternate endings to find), easy travel by map (click location to go there, not all locations are shown though), fairly intuitive interface (see BaSS, you can also cycle actions by right clicking), nice intro (background story told via a bard's song), call on your band using a horn (somehow this usually doesn't alert the enemy), fairly well developed characters (displays scenes at the end of each day where you get to know the group), some fun ways to get killed (there's a post death scene where the party discusses your idiocy), somewhat randomized riddles offering some extra replay value

+/-
For a band of outlaws the protagonists are very well spoken, mostly linear structure (chapters separated by days, next day is triggered after certain goals are met but you can do reach them in the order you choose), why practice with the bow when firing in the action sequences is automated anyway?, need to check the manual for some things (lookout spot and archery range locations, Gemstone lore, hand code, druid/tree names), one scene is different (raunchier) on Amiga (when first showing the heart stone to Marian)

-
​Clunky controls (can't cancel an action after clicking on a target, so-so pathfinding (the maze, some screen exits in the forest), can't cancel the hand code move (though you can erase letters if you make a mistake), clunky staff combat (no explanation on how it works either) and pixie catching (also why don't the widow or Marian just tell you about them?)), "I don't want to/not going to do that", hard to navigate early on (need to wander around in the forest to find Marian, etc.), lack of 'exit' symbols in each screen, slow paced (you can speed up Robin's walking speed but not NPC movement in cutscenes, of which there are lots), lack of alternate solutions? (washing and using the monk robe you got when rescuing Marian for example, or taking the sheriff's man earlier on as hostage), trial & error (very short time window to shoot when meeting the false knight (movement is locked in this scene), you pretty much have to lose once when rescuing Marian from burning because you're not given the choice to equip the ring upon seeing the flames (instead of magically knowing about them being lethal beforehand - the rescue scene is automated), sometimes can't see if a room is fatal before moving into it (in the monastery while rescuing the dwarf (especially annoying because you need to revisit the scribe's room to know how to escape but the enemy will be there by the time you figure out that a certain scroll there was important), town pub when undisguised), moving away from an area before talking to NPCs might make them disappear so you miss their dialogue (shooting range, widow's hut), rescuing Marian (in the previous encounter with a villain you had time to look and even talk to him before shooting), can't cancel map travel once you've opened it?, no control over dialogue (can't ask people what you want to like in text adventures or MI series), plot oddities and devices (the second soldier (who arrested someone for shooting one of the king's deer) deserves to be buried but not the first one?, 'I shall be armed with my wits' - Robin in the monk cape, shooting the corrupt monk is considered immoral but not the soldiers?, Robin and friends don't take advantage of the situation when the sheriff and his troops are all getting drunk in the pub), uneven visual and sound quality (some odd colour choices and shading techniques, poorly drawn overhead sections, samples used for some situations but not for the music), the chase scenes (sometimes there's no queue from Robin letting you know that they enemies are close to you, for some reason they don't sweep the lookout spot), the caravan ambush is completely automated (you do get to choose from different strategies but only one is the correct choice and the cutscene looks the same), a bug when testing the queen's knight makes it not matter if your hand code input is correct the second time