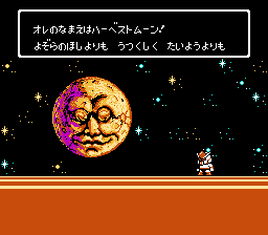 
*Depends on the build

+ Character creation system (gain a new one after each boss, three parts - body/weapon/head, name each build, builds can be canceled after testing them out (in an empty room though, not on enemies), each part has a few different looking sprites to choose from), choose which order to tackle the levels (hub map), decent dialogue (sometimes bizarre - save santa claus from a dragon which he then uses to pull his sleigh), somewhat similar atmosphere to Little Nemo, Mega Man style gameplay (the standard controls are pretty much ripped from that series), good bosses overall, some good enemy AI (armadillos, penguins), upgradeable weapons, different paths depending on where you were previously when picking a new level to play, plot twist (pretty obvious but still), hover and boat abilites, checkpoints before bosses

+/- Can't switch between characters on the fly, can't duck?, easy to grind for power ups, shuriken seems to be the best weapon for most situations and starts out the strongest, Weight is a meaningless stat?, pencils are just weaker shurikens?, unlimited continues?, no run/slide/dodge moves, power ups disappear after a few seconds

​- Some trial & error (character creation - most weapons are kind of inefficient, boss patterns, fast enemies, unusual mechanics - armadillos can still throw their shell after death, shell still harms you when floating in water after the armadillo is gone), characters can end up pretty crappy, some attacks are pretty limited in use (flower) and you can only have one per character, no difficulty options, having to backtrack through parts of old levels to get to the new ones or when searching for the princess later on (she's on the forest->milk lake path, the lowest one), uneven visual quality on backgrounds, uneven difficulty (overpowered shuriken+jet combo, easy final segment), some characters have pretty floaty controls, can't access the status screen or switch character after dying during a boss fight, can't move backwards to a previous screen/area, somewhat repetitive level designs (more focus on enemies than gadgets or traps but some of them are also repeated a lot), item containers (eggs) take several hits to destroy (breaks flow), some slowdown and flicker, can't switch character until using a continue on the road to the first Tapir encounter (means more trial & error in picking the right character for the right segment), some invisible walls where it looks like there's an exit to the next screen, it's only worth focusing on 2-3 characters (you'll occasionally want the hover and boat abilites)