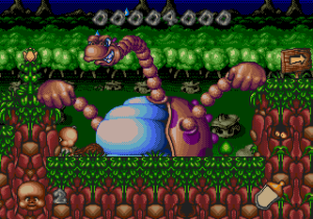 MD:
- 18 levels
- only has easy and normal difficulty
- animals that let you ride them: ostrich, ant, dino, deer, goat, turtle, "dog"
- detailed backgrounds that fit each stage's name. It should be noted however that they are somewhat distracting because of the high saturation (color "strength") level compared to the foreground and sprites. The right way to do it is the other way around.
- three kinds of bonus levels
- harder levels and enemies
- more cheap hits than on sms
- much harder river race bonus level than on sms (almost impossible)
- very good sound effects, but somewhat scratchy voice samples

MCD version:
- 18 levels (same layouts as in the MD version)
- only has normal and hard difficulty
- normal difficulty made easier (birds jumping out of water move slower, milk bottles Fully restore your health, you get extra lives more often)
- minor scaling and rotation effects (boulders, dippy the dinosaur, bird bosse’s egg, punched squirrels)
- the new boulders in the lava level now have an almost square shape - odd
- animated intro and outro (the intro is great, but the outro just shows Chuck and Junior going off into the sunset – lame)
- cd quality soundtrack which is completely different from the cart and Amiga versions (and imo worse, with mostly forgettable tunes)
- no special music played when riding animals
- sound effects are all high quality samples, but some of them are worse than on MD and oddly enough, inanimate objects make screaming sounds when you hit them