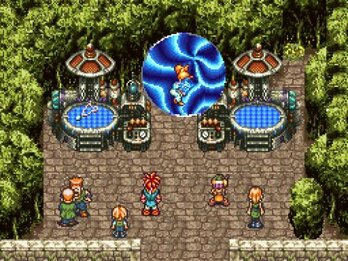 +/-
​So-so reason for limiting the party to 3 characters (Lucca, Crono and Marle are all from the same time, so it's not four different times)
no sequence breaking?
most challenges are easily solved by grinding a couple of levels
can't change accessories during battle
each character represents an element (with some exceptions)
grim reaper gear?, triple combo accessories are limited to specific characters

-
Many fights look avoidable but aren't
plot oddities (Why does Crono's rescue require a special item and procedure when the Silvr is supposed to give full control over time travel?, the King is put on trial in 1000 A.D. for selling his own heirloom?, Lucca should've known the password and have been able to save her mother's legs, Toma's grave scene - acts like you actually knew each other well, Villagers in Zeal era don't warn about Dalton coming and the party doesn't resist (again!), Dalton at plane scene and the scene where the 'Prophet' forces the party to go to a different time are rather silly - why no questioning or resistance?, Nobody notices the small black bat on the way to Magus?, Queen/King don't explain who Cyrus is in 600 A.D. when you're there to battle Magus, exposition from hostile demons in Medina Demon village, why do you need to go to Promethe Dome to get back in time when in the future for the first time?, can't interfere in the 'Robo vs. his companions' scene)
some enemies can only be hit by some in your party (Silhouettes in the future)
can't move through/push most NPCs
somewhat slow battles (animations can't be sped up)
​slow movement speed on world map, some backtracking (there could've been a faster way to get to the 'farthest reaches of time' area, need to go back and open the western dome in 2300 A.D.), some sprite swapped enemies and bosses, can't teleport out of dungeons (with some exceptions), casting curative magic on an ally as it dies cancels the spell, Black Dream dungeon is too easy if you've done all sidequests, some trial & error (some bosses have pretty cheap patterns (multiple attacks in a row, super powerful counter attacks) which require specific tactics and equipment, finding out boss weaknesses/immunities and patterns), accessories can't be discarded/sold/sorted, no scan or cure status (?) spells, some techs are seriously overpowered for some parts