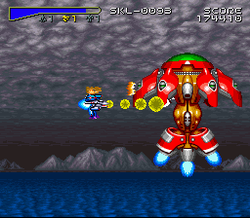 
​
+ Manipulate enemies to use like options/gun drones, three different ships with 3 different weapons each (some are pretty similar though), good weapon system (you can take a few hits but lose an upgrade each time), does quite a good job of retaining the atmosphere of the anime with the ship designs and music, some funny engrish, some nice special effects, difficulty options, good bosses

+/- Quite similar to R-Type (including the slow pace),

- Very unforgiving checkpoint system (none at final level), most enemies can't be manipulated (and you'll often lose the enemy you're controlling if you try to to manipulate something else and it fails), some manipulated enemies make things much easier, minor slowdown, trial & error (cannons popping out of the ground and shooting, enemies attacking quickly from behind, stage 4, final stage (spears), white screen on final boss), somewhat weak sound effects, final boss is much harder than the rest of the game