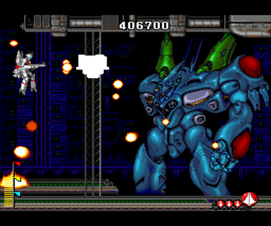 +
Nice cutscenes overall (voice acting, fully animated) - some shots look a bit unpolished compared to others and some are re-used
Difficulty options (easy-very hard)
Mixes in forgotten worlds-like segments for the main boss fights (here you can take 3-4 hits before going down)
Level up system ("shops" in-between levels let you equip new weapons and other upgrades for the collected experience points - you don't lose exp from choosing here as it's simply a condition to using better equipment)
Main bosses have several parts which can be destroyed before the main body for more exp
Decent variation
Good art direction
Even the cheap alternate weapons are pretty strong
Shows a cool picture of the main boss before each mission
Mini-bosses
Crosshair symbol warns you of some incoming attacks, some destructible scenery/environmental hazards, nice space battle background in level 4, pretty good bosses overall (they tend to have more than one phase), hidden power ups (exp?), skippable cutscenes

+/-
Japanese text in shop menus
No smart bombs?
Alternate weapon has a charge/overheat meter meaning you can use it infinitely but need to consider when to let it cool down (you don't take damage from overheating - the attack is just drained of energy)
Gradius-style side missiles along with the main shot (same button)
Die in one hit in the levels but respawn on the spot until using a credit
Voiced dialogue scenes in-game (pretty short)
Can only buy one thing at a time but if you get a game over you're put at the shop screen before restarting the current level
Moving into walls in the base level doesn't hurt
Can't fire any alternate weapon at the same time as the main one (would've caused more slowdown but felt cooler if they'd have pulled it off)
No weapon power loss from dying even on Hard
Cliffhanger ending (normal and hard), you're a pretty big target during main boss fights

-
Can't use alternate weapons during boss fights (and the main one is always the same until at level 4 where you suddenly have a spread shot)
Can't switch ship speed in-game (only pick one speed before beginning)
Can't re-access the shop after reaching the last level (which starts right after a near full level's length outside of the main enemy ship - makes it pretty hard to acquire the final weapon)
No weapon inventory and whatver you buy replaces the previous alternate weapon
Can't pick the same alternate weapon twice in a row
Can't choose when to transform
Since they use the shop idea from UN Squadron they might as well have let you pick where to attack as well
Some trial & error (boss patterns, can be hard to tell if you'll get hit by the ground terrain or not in a level)
The shield weapon is overpowered on Normal (takes too long to overheat, can attack enemies by moving into them, charge meter not affected when taking hits)
In-game music tracks fade out instead of looping
Some slowdown, the boss music keeps going during the score countdown after finishing a level, the cluster bomb (230k) weapon is kinda crappy considering the exp requirement, pauses in the action here and there, repeats some enemy types too much, no back attack during levels? (none of the weapons I tried anyway), easy second phase for the final boss, white spread laser is also kinda bad (or very situational) as well as the spinning ball, the music volume is sometimes kind of low in-game,