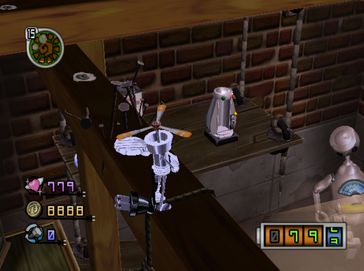 +
Unusual premise (a family with some relationship problems buys a small companion robot for their daughter who the player controls, goal is to make/keep the family members happy as you learn more about their lives and explore their house) and setting (a single suburban house and backyard that you explore as a small robot)
Some RPG & AA elements (leveling by performing positive actions and finishing quests which yields happy points - trade these in at your "home base" to gain life bar upgrades and tools/abilities, can buy other items (tools (ladder and bridge items, warp points, trauma suit can be used to warp back to your base/house), weapons, vehicles) via the shop in your base with gained money or bolts), upgradeable weapon (charge shot and range), a few hidden paths)
Good art direction and nice overall animation
Some good humour (silly and over the top - anime-style, superhero and guru parodies, the war between the toy soldiers and the family dog)
Unusual bittersweet and sometimes mysterious tone (family's personal issues, the music, flashback story bits, how giga-robo is introduced is quite well done; almost everything ends on a happy or sentimental note though)
Minor puzzle element to getting around the house and some decent spatial awareness ones when it comes to getting to the frog rings and certain other items as well as a decent matching/timing puzzle in the UFO
NPCs with schedules that change a bit as you progress the story
Find/buy a few tools and suits used for exploration and traversal (ladders and bridges, the blaster at a few points to remove obstacles or hit switches, spoon - dig holes in soft dirt (for planting seeds) or dig up buried objects, radar - pinpoint the location of something hidden such as doors, frog suit - talk to any frog+the Bluebird and Jenny, alien ear chip - understand alien speech; can only equip one tool and costume at a time)
Can see your avatar when it's behind objects
Forgiving betting mini-game (2x money if you win, 10% of bet back as happy points if you lose)
Decent level of world interaction (feeding the fish and other animals, getting reactions from posing in front of NPCs, etc.)
Some shortcuts (not quite enough of them though)
Some minor layout differences between day- and nighttime
Decent map system (detailed and zoomable - really a zoomed out overhead view camera rather than a map, shows most quest items), most quest items are highlighted when looking around in FP mode if there is line of sight), Radar tool - detects nearby items
Some warp points/teleporters (only from the bottom to the top of stairs though and you have to buy them with bolts that you grind for), some memorable characters and locations (Sophie, Mort, Sunshine, Jenny, the parody chars / the castle model, the past (uses time travel for another flashback scene of sorts with a basic puzzle via a found UFO in the backyard; similar to Day of the Tentacle)), the conclusion of the free rangers side quest,
Good cutscenes overall (some are overly drawn out), in-game epilogue (not much to it though and the spydorz are still around)

+/-
Partially open-ended structure (some key/quest item gating in that you can't go into the foyer before learning to pose or into the kitchen before posing in front of sophie for example - can get the chibi-blaster and go outside before doing this; the living room is a hub for the first floor while the foyer is a hub for the second though some other rooms also connect to more than one room, have to get the giga-battery before you can get the living room ladder?, can't buy the kitchen or foyer ladders before the living room one, can only buy a 1-2 different traversal tools at a time in the shop)
Pretty frequent save points placed at outlets in the house which also serve as battery recharge points (3 slots, shows collecting and leveling progress as well as time taken), Can get auto-revived with a bit of health if you buy the chibi-battery (about an hour into the game; Zelda 3) - one use item only though which is annoying considering its price+you can only buy one at a time
Side quest focus (mostly fetch quests, some mini-games including two races that you buy vehicles for - can't use them outside of these)
Collecthathon (happy points and money are often gained by walking around and picking stuff up and you need these to progress, reactivating Giga Robo costs 10k, etc.; optional: 6 colored blocks, 20 frog rings for jenny, stickers)
Partially inspired by Toy Story (talking toys - who also hide that they're alive from the human family - and the suburban house setting)
Pretty handholdy early on and from time to time later on as well (your flying helper called telly vision talks a lot)
Unlimited lives however you lose some money from dying and you always restart back at your base
Can't move while looking around in FP mode
In-game manual however it can only be accessed in the living room at night
The game plays a short ditty when moving around (similar to Dig Dug or Dragon Slayer 1) which changes instruments depending on the surface as well as tempo depending on your speed - doesn't sync to the background music though. Picking up the cord makes you move a little bit faster
No urgency to the dehydrated frog quest
Semi-silent protagonist (can only say yes/no and use poses with different suits to get a reaction out of NPCs), Can't make your helper ask other toys to carry you or help you in a fight
Can't grab ledges and climb them while flying (can be annoying when trying to reach a platform away from and below you and it being just outside of your reach and chibi-robo actually can grab a ledge if you were standing on its platform)
Garbage+coins+spots respawn in the same spots (good in that it's easy to slowly grind money and exp but also makes exploring for them less interesting)
Some aspects of the visuals look more realistic than others
Random enemy encounters which you can escape from, can't control telly vision to look around in a room, squirter is used like a key only, one short 2.5D segment with a stealth element in the kitchen sink drain (not much to it sadly), some mini-games (basic planting and cooking (burgers) mini-games - meh, rain dance mini-game - decent, ranger training - ok, space scramble rail shooter race - decent, game of chicken (brake later than the opponent while driving with cars) - meh since you have no control over the actual car)


Bugs:
-The battle encounter music disappears too quickly when moving away from them and then doesn't restart even as you're fighting the enemies unless you move really close to their spawning points
-If you warp back to your base after first meeting the aliens (to get the ear chip) then the next story trigger doesn't activate - have to re-enter it
​