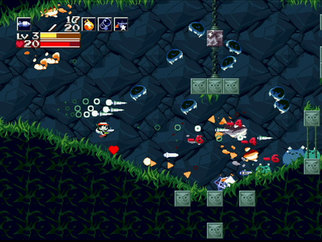 + Metroid/Monster World-like gameplay (more linear though), upgradeable health and weapons, some fun weapons (upgraded bubble shot, missiles, machine gun), four way fire (need to jump to shoot downwards though, can't shoot diagonally though it's rarely needed after getting the machine gun or jet pack), unlockables (Curly mode), some hidden items, some decent humour (one of Jenka's puppies is in a chest), good bosses overall, jet pack (also works like a dodge move; only annoyance is that there's no charge meter for it letting you know when it runs out), alternate endings, dialogue choices matter (sometimes annoying, see below), optional boss (go into the shack during the escape sequence), good art direction overall

+/- Very frequent save points (and health/ammo recharge stations are almost as frequent), pretty linear for a metroidvania, silent protagonist (talks a little bit in curly mode), 8-bit NES/GB style music and sfx (with some FM-ish sounds here and there), surprisingly grim story considering the art style, the machine gun doubles as an overpowered jet pack, one use only energy tank (and there's only one of them?), refill stations do not recharge your weapon levels, need to press a button to pick up life capsuels (meant for people who don't want to pick them up?), forgiving hit detection for the player avatar, shows numbers on screen when charging weapon levels or damaging enemies/getting hit (strangely the level up meter is unclear about how many points are needed until the next level and regular enemies don't have health bars),

- Can't skip cutscenes/sentences (at least you can speed up dialogue but not always as fast as possible after dying at a spot with a lengthy scene), only one save slot per game (you might want to try different dialogue choices and have different saves ready to get the alternate ending), counter-intuitive route to the best ending (need to ignore the dying professor at one point, etc.), you'll keep getting the same kind of enemy drops even when you're fully stocked (weapon power, ammo, health), somewhat slow movement and jumping, can't always review dialogue and there's no journal/log feature, very small map graphics and each area is already explored when you get there (it also doesn't show doors; would've preferred a super metroid/sotn-like system), uneven visual quality (nice sprites/portraits/occasional scenes overall; plain backgrounds overall), some backtracking (the puppy fetch quest (can't grab them all in one go despite being able to carry a bunch of weapons and items), have to do some fetch questing in a specific order (explosive parts)), the cloaked guy in green doesn't give very useful tips (could've told you about stretching out the squashed robot, for example), some plot oddities (Itoh doesn't react to you wearing a mask, need to talk to the fat mimiga in the jail cell to be able to escape (developer could've just made him tell you about the letter without having to talk to him), the teleporter that professor Boost just used when you first met him appears to be non-functional?, can't tell anyone or get rid of the red flowers that you've seen before the sand zone, some cockroaches are friendly while others aren't - not explained, if Curly was too damaged to walk to the boulder then how'd she/it get past the boss and get there first?, the protagonist gets knocked out twice by enemies that he can pretty easily beat just for story purposes), drops from bosses can disappear before you're able to move again, some trial & error (some shots from off screen, need to examine the bookcase inside to exit the shack during the escape sequence (the door gets stuck when you enter it and the only visible way out is the super hard path to the optional boss), leap of faith on the way to the optional boss, need to re-enter the mushroom's room to trigger the speech where you've found that the mushroom badge is useless, boss patterns, deserted house, need to skip two items to get the best gear later on (machine gun and the upgrade in the labyrinth shop when you first get there), somewhat uneven difficulty (easy to get some great ugprades, some easy bosses, there's a fairly steep increase in difficulty from the underwater/core boss onwards, difficulty spike in the spiky area before the final bosses), Sky Dragon is a stupid name, no upgrade or option that automatically charges the level of the weapon with the lowest level if you're picking up weapon chips/yellow triangles while having a fully charged weapon equipped (see later Mega Man games for something similar), unforgiving hit detection on enemy drops (missiles, chips, hearts), sometimes hard to see what's going on due to all the explosions/smoke and falling enemy drops (final core, hell area), it sometimes takes a second or so for a beaten enemy to drop something (particularly annoying in the hell area)