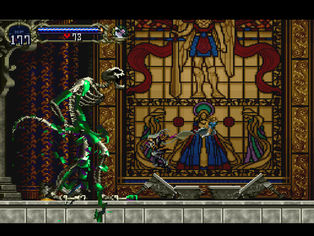 
​
+
Wield one weapon per hand (or shield and weapon, can't use both weapons at the same time though)
Two large castles to explore (no. 2 is no. 1 inverted though)
Great enemy variation
Shields
Transform (into a wolf, a bat, and mist) to reach new areas
Very good animation (some large bosses), shop (sells tactics on beaten bosses), flea armors, familiars, unlockable character (Richter, tons of new moves but only uses whip), lots of secrets and glitches, spells (secret button combos), shields (block most projectiles), many memorable locations (colloseum, mines, clock tower, underground river etc.)
Can teleport to the shop any time with library cards, unlockable Richter game (harder), "Sniper of Goth"

+/-
Very frequent save points
Many reappearances from earlier games (Rondo)
Awful script and voice acting (in a 'so bad it's funny' way)
Spells are tricky to pull off
Richter game removes most RPG elements (shopping, alternate weapons and equipment, the inventory/status screen, spells?, status effects, exp)
No key system like in Rondo of Blood?

-
Can't dash forward (this makes skipping weak enemies later on impossible since you need the momentum, why have a backward dash and not a forward one?)
Can't get items from torches or see enemy/damage on enemies from the get go (silly skills to find)
Jewel knuckles are overpowered for the first third of the game (they're well hidden though) - then the combat knife takes their place for most of the mid/late game
Most bosses are pushovers (simple patterns, low hp)
Lots of redundant equipment
Ggood equipment lying out in the open (not rewarding to get), some annoying sound effects (voices), a lot of ideas seem underdeveloped and shallow (cannon, switch puzzles, dark spiky cave), uneven difficulty (1 dmg from most enemies in an area, then a tougher enemy comes along doing 30 dmg), huge knockback, can't sell anything but gems (can't even throw stuff away?), item usage is weird and tedious (need to equip as weapon, throw item on floor then pick it up), backtracking (there are a couple of teleporters though, see lack of front dash), sound effects are often too loud in comparison to the music, cheap hits (enemies shooting from off screen, Scylla boss), still uses the up+punch for sub weapons (overlaps with spells), all projectile weapons are one use only, punching is a bit weird - if you land from a jump you can get in three attacks in the time it takes to do one while standing still, a lot of dead space and long flat corridors, lots of tedious vertical platforming in the inverted castle, the transformations have lacking controls (bat flies too slow, mist is unresponsive, wolf has awkward momentum during jumps - see Psycho Fox), no shop in the inverted castle, cheap hits and safe spots at the end boss (claws - no hint before attacking, stand behind claws and you'll take very little damage), gas cloud power ruins the late game (invincibility + flight+ decent damage to nearly all enemies and bosses for very low MP costs),super cheesy vocal ending track, can't sort items in inventory (annoying since you find so many and can't sell anything but gems), some trial & error (bosses/enemy patterns, a few leaps of faith, some item effects and all spell combos), unskippable cutscenes, minor slowdown