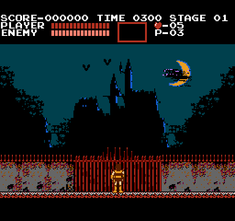 +/-
Rewards skill/patience with an easier game (if you can keep the water or cross + upgrades the game is much easier, yet you have to memorize where weapons are held or stop at every candlestick to check)
frequent checkpoints (some parts become much harder if you die because there might not be any power ups - you always get one whip power up though)
forgiving hit detection around your whip

-
Trial & error (after stage 9 you need to learn the entire stages to progress, very tough final levels (monkey and medusa overload)
uneven difficulty curve (spikes at 11/12 and 15, some overpowered bosses (frankenstein, death - both have certain weaknesses but these require holding on to certain sub weapons), final segment before Dracula)
somewhat sloppy hit detection (large sprites; unforgiving around the spike traps, forgiving when fighting Dracula)
huge knockback (one good thing is that it allows for shortcuts at two points)
no jumping off of/onto stairs
some annoying enemies like the (constantly respawning) medusa heads and the knights (in conjunction with red skeletons, monkeys or medusa heads)
​some slowdown and flicker, no password save (frequent checkpoints instead - Famicom Disk release had two save slots and you could save after each boss), no options, awkward controls around stairs (your character doesn’t automatically climb stairs when there’s a cliff making you fall to your death, if you stand close to some stairs you'll automatically climb them when pressing up even though you're facing away from them), holy water is seriously overpowered, some cheap hits (enemies appearing right when you're jumping between platforms (enemies sometimes spawn slightly further in than screen's edge), Dracula teleporting into you, scythes spawning right next to you when facing Death, the final segment before dracula), picking up a new weapon means you lose your upgrades (number symbols), enemies sometimes disappear when walking off screen, enemies sometimes kill themselves by jumping into pits, easy to pick up an item you don't want (from candlesticks hanging in mid-air over a pit), smart bombs and invincibility are usually placed where you don't need them (no item inventory), poor jump control (can't control length or height and can't turn around during a jump), a bug makes it impossible to reach one of the hidden items if you destroy one block from the wrong side of the wall