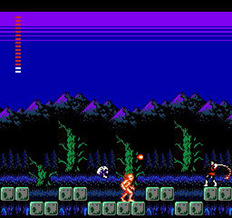 
+/-
Hearts now work as currency instead of ammo
Most sub weapons have infinite ammo (inconsistent - the stake is one use per purchase only)
Some traders are in dungeons or hidden behind walls (tedious to get to them/why would they hide from you?)
Slight delay when attacking with the whip
NPCs act like poorly written pieces of an FAQ
Near insta-kill spikes, some liquids are insta-kill (water) while others can be walked through (apparently swamps), pretty easy to grind levels if you have the patience, no way to attack upwards (need to wait on stairs in some parts for enemies to move), respawn on the spot (even after using a continue), some towns don’t have a church


-
Poor translation
Expensive items/weapons
Lose all hearts/current exp if you die three times
Tedious day/night cycle (can't enter houses for shopping or healing, creates difficulty spikes, slow transition)
Poor clues (dialogue (some false ones!, no explanation on how/where to use the stake (only that you should 'strike' something with it - you'll need to have seen the crystal for it to make sense) and visual (easy to miss some of the 13 clues such as the ones in towns (hidden probably in the last place you'd look) and #5 in Aljiba forest (spiders distract you and no visual clues means you'd have to use the holy water on the entire forest))
Lots of dead space and unnecessary dead ends (some which can only be reached by going through walls with a subweapon making you think there's something there when there's not), no world map (only in manual?), no healing items (long between towns, long night period during which you can’t enter churches), limited jump control (can't turn around in mid-air, no height control, no horizontal control), only three bosses (they suck), trial & error (floor traps (Berkeley Mansion), some cheap enemy placements at the beginning of areas), easy to accidentally miss reading a clue from one of the hidden books (you don't get a second chance), lame final dungeon (no enemies or hazards), slowdown, backtracking (out of every mansion, back to beginning after second mansion), sloppy hit detection around spikes (second mansion), repeats puzzles (kneel at water), repetitive dungeons, no boss music and bosses even respawn like regular enemies

Notes:
Bugs:
-- When holding a morning star or a chain whip, in one of the animation poses Simon's hand is flashing along with the whip.
-- Simon can fall through floors by using a weapon at the right time when falling from two-brick ledge.
-- Simon can jump up three-brick tall obstacles by using a weapon at the right time. [Not present in FDS version]
-- When returning to the gameover screen from the password screen, the palette for the heart icon is wrong.
-- The ferryman does not stop at the opposite shore.
-- Open doors in towns do not close at nights, though you cannot enter them.
-- Orbs in mansions reappear even if you have collected them once.
-- Cluebooks reappear even if you have collected them once.
-- Gift-giving NPCs happily give you the same item twice, even if it is a non-consumable item.
-- Town signposts become disabled when day/night changes. [Fixed if you enable palette-fader]
-- If you fall from a great height and then jump to the screen's edge, so that the scene changes before the screen has fully scrolled vertically, you may end up inside a wall or under the floor. 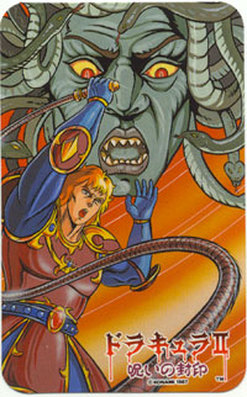