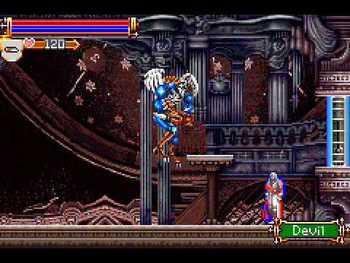 
​
+
Better whip control overall (slighty faster swing and SCIV style spinning while holding the button down from the get go (you also get the CotM style spin later on); however you can't quickly swing in the other direction when jumping any more)
Unlockables (play as Maxim (faster walking and attacks but no equipment, all doors are unlocked), hard mode (should’ve been there right away), boss rush mode)
Somewhat larger sprites and improved character animation (Juste's jump looks a bit awkward though and there's no block pushing animation here), graphics are closer to the SotN style (but with brighter and stronger sprite colours - a bit too much in some cases)
Shops (only certain items can be sold – bummer)
New moves (dodge/dash from SotN and dive kick (backwards dash means some ground enemies can have fast attacks that can be dodged for more interesting battles, sadly the dashing replaces the run move from CotM so you now have to mash the button to move at a good speed), charge attack (crushing stone attachment for the whip - only canceled/triggered by opening doors and pausing)
New sub weapons (stone fist - multiple hits in a row, holy book - spins outwards hitting almost everything on screen)
Better backgrounds and graphical effects overall (some of the effects look rather unfitting though)
No need to go into the menu to switch spells or switch between spells and sub weapons (hold R + Up or L&R + Down respectively)
Puzzles get a bit better later on
Somewhat interactive environment (traps, levers, mechanisms)
Mini-game race, three different endings, more scripted in-game events like the chase in the beginning, more frequent mini-boss-like enemies

+/-
The music engine is very close to 8-bit in places using a lot of square and saw waves (creates an aesthetic dissonance between graphics and audio)
Two castles to explore in parallel dimensions (the layout is almost exactly the same and they don't affect each other except that a few barriers also open in the other one when opened)
Lasts longer but feels drawn out
Keeps the MP regeneration from CotM (there's also an armor that slowly (too slow without fast forward) regenerates HP)
Very feminine looking male characters with exaggerated clothing (just comes off as a bit silly given what you do in the game and the overall serious tone)
Critical hits (random), map items (shows a sub area of the castle when found, unexplored parts are darker), hp and mp refills after bosses, starts out a bit easier than CotM, gemstones add elemental effects to the whip (replaces some of the card combo effects from CotM, sadly the effects don't show on the sprite and there's also no poison stone), the map doesn't mark locked doors or other obstacles (it didn't in CotM either), healing items are more effective, re-uses a lot of enemies from Rondo of Blood, some minor sequence breaking possible (ice book + fist weapon spell activated near ledges that you can't quite reach otherwise lets you get a heart upgrade and Vlad's ring a bit earlier, bouncing on a flying enemy with the dive kick lets you get Vlad's eye earlier), reduced knockback after taking damage while on the ground but shorter invincibility time, can't dive kick without double jumping first, easy to farm for hearts and money in some spots since the candle contents are set and sometimes good stuff is placed near room entrances, sellable gems are very rare, more open ended in that two bosses are optional (three if you want to skip the wind book and a HP upgrade, four if you skip the cipher's charm - speeds up MP regeneration; you need to have played the game to know about the last two being optional though) but less in that you can't skip ahead to a later part of the game, hard mode doesn't change much about the game (increased enemy HP and damage - does help many enemies and some bosses become more of a threat even with spells though many still aren't, somewhat higher flyer frequency (small skulls at least)), some delay on dashing during attacks (can only dash at the last frame while Juste is holding out the whip) - the aciton doesn't even register if you press the button during the attack animation so you have to mash it in some situations

-
Mostly poor AI considering your abilites
Mostly easy bosses (Max Slimer/Peeping Big/Shadow/Dracula all kind of suck; Devil, Pazuzu, Death, and Maxim are the only exceptions though some earlier ones would've been fine with more expensive and/or less effective potions and spells)
No config in the main menu
Trial & error (some redundant shop gear like the 800$ armor (you'll find pretty good armor close to for example the first shop), boss patterns, no hints to the locations of the body parts (the tooth is especially hard to notice as it's situated out of sight next to the mini-game race track), how to acces the "???" and zig zag card shops, finding the summoning book (it's above the save room in the southwest and there's no visual clue in Castle A), the way to the first shop sometimes won't open depending on how you killed the mini-boss in the adjacent room - I think you're supposed to make it fall to the right with your last hit?, figuring out where a key leads or what path a switch opened up can sometimes lead to aimless searching or having to memorize earlier room locations)
No card system or battle arena
More backtracking (you can’t use all gates for teleportation within one castle, you don’t get keys/ways to break walls until much later on so you'll run into a bunch of dead ends in the first half of the game and not be able to teleport back to where you were - apparently the quick save feature can help as it takes you back to the last save point you saved at with no progress lost?), less interesting level design overall (seems emptier, slow start with dumbed down puzzles, items often seem placed randomly (makes it much less rewarding to find them, potions are everywhere), only one hidden room (ie behind a breakable wall) in the ENTIRE GAME, generic items to collect (collectibles) for the sole purpose of adding furniture to a room, new enemies do not appear in already explored areas (see CotM, not having them makes backtracking less interesting)), the whip stones suck (no audio or visual difference, pathetic ranged attack and recycled spin move), slower/floatier jumping, dashing doesn't affect jump length (so most enemies can't be skipped without taking some damage), you are now forced to find the slide move (+ damage/enemy name displays and the spinning whip move), sub weapons get replaced by spells (which are much better (too good actually) but lack versatility since you can only carry one sub weapon at a time - a far cry from the DSS system in CotM), still no sub weapon inventory (uses Rondo of Blood style switching), dropped items disappear much faster, very silly dialogue and predictable story, somewhat forgettable music here and there, high jump is somewhat harder to pull off, 1$ coins, block pushing is still slow, some redundant equipment, weird how placed items drop from mid-air as you enter the room, ugly glow effect around some sprites (can be fixed via a hack), pointless unlockable difficulty options for the boss rush mode (lower difficulties just mean that you won't fight all bosses, there's no magic and hearts are limited on all difficulties, also can't switch sub weapon between bosses on either difficulty), can't cancel the slide move (dashes can be cancelled), some padding in the form of zig zag shaped rooms


Notes:
Apparently you can also get the Lure key earlier using the ice + fist combo to gain access to the castle gateway near the entrance, meaning the game becomes more open ended: http://tvtropes.org/pmwiki/pmwiki.php/Main/SequenceBreaking