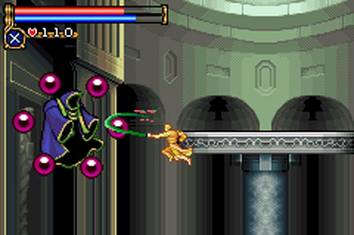 +/-
Slide move (Can't cancel it but it also does pretty good damage to enemies and you seem to take less damage from sliding into enemies than being attacked by them)
Mostly small sprites (does let you react more easily to danger)
Limited whip control (only forward until you get the poison whip card combo which for some reason hits diagonally upwards only)
Double tap to run (r for specials could've been done differently - double tap + attack or r to tackle, jump + face a wall to wall jump, up + jump to super jump)
Long knockback after taking a hit
Very fast falling speed, heavy boxes aren't marked on the map

-
Trial & error (card combos, where cards drop, boss patterns, enemies shooting from off screen, can't look down (many blind jumps))
Pretty unbalanced card system (some useless stuff, some overpowered, you'll miss a lot of stuff when it's relevant on your first time through, the card system isn't explained properly in-game (just briefly mentioned), )
Some slowdown
Cards are generally so rare that you'll forget about them (and many features are pretty useless, drops seem affected by luck - you can find luck increasing gear but it doesn't seem to help that much)
No shop
Mostly useless sub weapons (except for the cross and in some situations the axe)
Very vertical jumps when you're not running (see Contra), no difficulty options, a lot of dead space, still a lot of backtracking (there could've been a teleporter near the beginning and in the top left) and there are som unnecessary points of no return here and there, mostly generic looking sprites, some tedious vertical platforming (it generally helps to have the axe), no sub weapon inventory (it works like in Rondo of Blood instead - it was 2001 people!), somewhat uneven difficulty (3 pretty easy bosses (the golem in particular), 4-5 are super tough without the right card combos or getting most hp/mp upgrades before them, 6-8 medium), boring dialogue and predictable story, somewhat slow walking speed (nullified by a dash move ~5 min into the game - kinda redundant to not have it from the get go), anticlimactic dracula fight in some ways (you can walk out on him when he powers up), no save point next to the battle arena, minotaur room in battle arena, few music tracks, the heavy boxes are a pretty uninspired way of gating (directing the player's progress) - in general there could've been several more ways to sequence break earlier on, block pushing and moving the sewer block staircases is slower than it needs to be, healing with the jupiter/mandragora combo is too slow, having to go into the menu to switch card combos gets a bit tedious, can't press pause to get out of the pause menu when you're in a sub menu, can't unequp magic items (to not cleanse the sewer waters for example)

​
Notes:
-Easy to use a glitch that lets you use any combo without having the cards for it