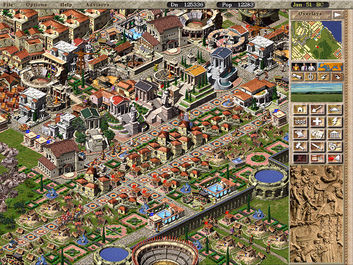 ​
​
+
Plays like a Roman era take on Simcity 2000 with some Settlers 2 elements tossed into the mix, campaign mode with two branching paths (choose between a trading/prosperity focused route or a war focused route from the third mission onwards - can switch at any point in the campaign between missions)
Pretty large variety building types (temples, entertainment, education, production, trading, military)
Fairly zoomed in view and the game lets you see how citizens are moving around (similar to Settlers 2) as well as right click them to get a voiced comment from each of them on how you're doing
Speed and difficulty options in-game (10% increments/very easy-very hard (changes certain stats (starting money, rescue loans, tax income, how easily people and gods become angry, wolf and enemy soldier strength)
Voiced briefings and citizens
Advisors and screens for various aspects of governance (labor allocation menu (set priority levels from 1-9) - good for making early growth smoother by prioritizing fountains always being on and food production, )
Can click and hold from a placed reservoir to place a second one with an aqueduct in-between them
Pretty good explanations for how to use new buildings/tools
Gods' favor system (if they're happy you get good events, if not you get disasters)
Rotatable map (4 directions - no smooth rotation), pretty high res for the time (1024x768 without mods)
World map where you can control trade routes
Diplomacy aspect (need to appease rome with goods and gifts for example), save feature (unlimited nameable slots?), some hostile wildlife, decent cutscene pop-ups for important events, fan made map editor, skirmish/city construction kit mode

+/-
Can't do anything while the game is paused (slowest speed is quite slow though)
Can't replace a tile rather than clearing it and putting something else on it (also can't deconstruct and "move" a building - not interrupting its activity as long as the same conditions are fulfilled)
Pretty heavily based on SC2000 in terms of optimal building placement
Can't put up signs or something else to make workers/walkers not take the wrong paths at intersections (can temporarily clear road and rebuild parts of your city but it's not enough)
Gardens can act as roads
9x9 is the best housing block layout in nearly all cases (but placing some houses outside of these near industry is also good) - 7x7 in deserts
No diagonal roads or building placements (four directions only)
Non-housing is built instantly when placed
Worse health conditions is an efficient way to deal with aging population problems
Advanced (and unexplained) mechanics for turning regular/random walkers into forced walkers (make a loop from the entrance point of a facility to its exit point) and for making certain walkers cover more ground (destination walkers) - this lets some facilities cover more ground but is kinda tricky to pull off
Can't save and re-use templates to speed up building your city (such as a 9x9 block with fountain and prefect+engineer), no slaves besides as gifts to caesar, need to really pay attention to how your citizens move around the city rather than just checking the coverage maps, can evolve 1x1 houses up to 4x4 using gardens/statues and various services (this way you can get four rows of housing next to a road instead of 2), warehouse workers are pretty inefficient at grabbing resources at a distance considering their size (and granary workers need a road connection, need to keep a steady supply of pottery and furniture (among other things) to get your housing to the top levels - getting to those mid levels once isn't enough and you can't scale back on supplying certain resources after you reach them, farms prioritize granaries over warehouses, no prisons or other punishments, overall city coverage does have an added effect on housing besides walker routes when it comes to entertainment and education (though the entertainment bonus is not enough for a house with no walker access to reach beyond casa level), some of your soldiers will often attack nearby animals during battles (they don't prioritize per unit or what you click on when ordering them to attack - individual soldiers just attack what first moves into range), enemy units destroy buildings very quickly, no missions where you compete against another city to reach the goal first, standard invasions tend to always enter at the same spot after the first one - makes it easy to wall them in and place forts appropriately,

-
​Very quick building/tech unlocking progression in the early missions and no access to advisors until the third
Some control/interface problems (so-so army pathfinding, can't tell cart pushers to reprioritize warehouses, no "set all to accepting/not accepting" button for the goods in warehouse menus, event pop-ups cancel menus and buildings about to be placed, can't quickly tell if a warehouse is currently emptying its storage (becomes a hassle as your city grows larger and because cartpushers can't reprioritize properly and will just stand around) can't use the keyboard to scroll the briefing text as it jumps way too far for each press, no build icon or undo or "close window" hotkeys (only for the overlay views (water coverage etc.) and advisors and game speed, so-so hit detection when right clicking moving citizens, unavailable features don't have their icons greyed out), grabbing goods from afar with warehouses doesn't seem to work properly in mission 6/lugdunum (can't maintain food in the eastern low ground area?)
So-so cgi graphics in parts (menus, briefings) - decent minor cutscenes though
While you can undo the previous action you can't go any further and there's a short time limit on the undo button
Housing tiles placed too far from a road disappear after a few seconds and the money is wasted
Trade with other cities and emptying warehouses and granaries is too slow (in mission 6/lugdunum I couldn't get to max pottery sales quota despite having tons of pottery)
Can't tell markets what to buy and market ladies prioritize wheat (so you need to make sure they don't interrupt trade and to make things efficient by not connecting all roads - they also seem to prioritize fruit over fish)
Some trial & error ("local uprising" troops attack immediately and move very fast, two types of wine means two sources of wine, fishing wharfs count as industry rather than food production, housing can expand onto gardens (two 1x1 to one 2x2 house for example - removing the garden tiles) but not statues, "trade center" feature only affects priority of imported goods, workers living in tents are as efficient as others for industry and you don't need many houses near an industry area (having just 1-2 near the industry is enough to draw from the whole city's workpool) - you can also make use of this when placing support buildings for entertainment (actor colony etc) to save space for the residential areas, granaries are also road intersections, gatehouse mechanics, warehouses don't need a road connection to what they're getting or accepting a resource from, no need to maintain a connection to the roads leading out of the map (just need to not block off the town on any side), can have far off industries not connected to the rest of the city if you just want to stockpile a resource, no explanation on how exactly to make your trade route on land efficient? - had caravans pass by an easily accessible warehouse with goods they wanted to buy, houses sometimes get stuck at smaller sizes but demolishing one or two of them will make them rebuild and evolve quickly, lacking tutorials for city layout (block designs, water coverage, etc))
Poor importing options (can't set how much you want to buy each time or to import only from one place after opening trade routes to more than one town that exports a type of good)
Can't raise or lower land or place trees and water
​Having to clear rubble from burned down houses and placing the prefect/engineer/doctor trio everywhere can get a bit tedious, it takes a few missions before you can build gatehouses (which help with controlling walker pathing), can't set what proportions of resources to accept for a warehouse, no zoom feature (was in Caesar 2), only the chief advisor has a portrait/sprite now, no single road gatehouses, takes a long time to train soldiers from an earlier fort after getting an academy (or you need to waste them in battle so they are replaced by academy trained soldiers instead), can't temporarily stop production in a facility (only destroy and rebuild), can't clear out small rocks, the game deletes som aqueducts if you block the road to rome (immigration routes) along with the last placed building, no general purpose temple which counts towards religious services for evolving houses (gets a bit tedious placing so many different temples), no workshops overlay (overlay=view only that type of building and walker), can't build on slopes, can't rotate the hippodrome, no secondary viewport that can follow a specific citizen (Settlers 2), hard to get the land traders to stop at the right warehouse in mission 8/valentia (tried building a couple right at the edge of the map and they just ignored them despite me setting them to trade centers), low combat morale takes way too long to restore itself (in mission 8/caecarea I reduced the enemy force to 2 soldiers after losing the first fight but still had to wait for them to move up to my forts (not sure if they always do or if I was just lucky either) while prefect walkers attacked them normally),
can't name theaters or statues?
can't place disasters?

Bugs:
-Sometimes a cart pusher sprite will freeze in the spot where you deleted a granary (means you can't place anything else there for the rest of the mission)
-Granary workers sometimes simply won't grab goods at nearby warehouses
-Market ladies occasionally glitch out? (peaceful missions 9-11 - had 2-3 granaries and near full warehouses with the right goods very close plus 2-3 markets around the block and houses still devolved)
-Workshops will sometimes not grab resources from a nearby warehouse if it's set to "getting" for that resource
-Music and building/habitant sfx can sometimes get choppy like a skipping cd player (replaying the briefing or toggling music off and on sometimes helps)
-The game sometimes reports that fishing ships are being hindered by a low bridge when there is no low bridge (mission 7/tarsus)
-The gatehouse will respawn one of its road attachments when rotating the view (fixed by removing the road and placing something there)
-Removed structures etc. can fail to disappear until you rotate the view, and other times their disappearance lags a bit
-Can sometimes run into an immigration barrier between 200-300 pop (happens every time on very hard; one way around it is to drop the difficulty and lower taxes/raise wages)
-Immigration can sometimes suddenly stop between 400 and 649 pop in mission 2 (deleting some houses helped for me)

​
Comment:
Finally beat the peaceful(-ish) path of the campaign after several hours spent with each of the last three missions. It's a pretty good city building game for the time, and a less "clinical" experience than SimCity 2000 for example. Here you have walkers with voiced comments, more direct control and overview of trade with other cities, a more rounded and warm look and decent cutscenes displaying important events, and of course the roman empire setting. But I definitely prefer how SC plays. It's fairly easy to make a nice city without learning tons of obtuse mechanics and how to avoid various issues there, and it's more advanced in some ways despite being years older, whereas in this game I had to learn every little quirk over the course of a week or so and even watching an expert play the later missions and lowering the difficulty to easy at times I could still just barely beat them due to various bugs. I'll check out the sequels at some point but now it's time for a change of pace.

Festivals
Festivals bring an immediate boost to your people's happiness in accordance with the following table: