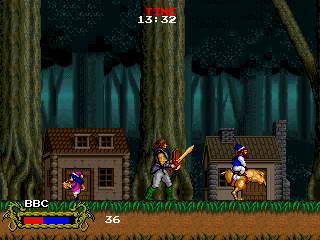 ​
+
2-player coop (some parts are more tedious in this mode)
Good variation (up until the final stage)
RPG elements (somewhat non-linear, towns with shops, fetch quests, some events, can upgrade your gear, health (very inefficient) and antidote items))
4 different characters (mage, ninja, female priest, fighter)
Some good bosses and enemy AI
Fast text speed (except for when in shops and checking out gear oddly enough), turn into a gnome briefly, some detours with hidden items, new gear is displayed on the characters, difficulty options, hidden gnome familiar (zombie town, short time/health limit), two sequence breaks possible (can skip a minor part in dungeon 2 and most of dungeon 3)

+/-
Time limit (stressful in an action rpg style game, you can buy more though and the game is pretty straightforward)
Fairly easy to stock up on a bunch of herbs by grinding
You can credit feed through the game (respawn on the spot - means you can respawn in a lava river)
Unbalanced characters?
Some unintentionally funny dialogue ("old lady", princess' reaction after the antagonists escape, antagonist's first dialogue, "thank you for the important thing!")
Pretty gory for the time

-
Trial & error
Cheap hits (some enemies (stone golems and zombies when they crowd you, reapers, gray trees) and bosses (fire elemental), enemy placements (slopes, close to doors), traps (lightning), final boss)
Stiff jumping controls (no height/length control)
The Fighter gets the most gear to buy early to mid-game
A bit short
No map, you can miss a couple of item info messages (magic flute, use for scales) due to other messages clashing with eachother, many tedious enemies (take several hits, slow down the flow of the game), some annoying sfx and they're too loud compared to the music, can't move while crouching, some backtracking (zombie town, castle)

​
Comment:
Cadash has the ingredients of a would-be classic; you can see elements that may or may not have influenced games like Diablo here. Problem is they just don't come together that well - characters are unbalanced, there's plenty of trial & error and even a bunch of cheap hits from thoughtless level design, an arbitrary time limit doesn't quite gel with the action adventure formula of the game (though it does sort of prevent grinding), and ironically it is impossible to (ca)dash through due to overly obstructive enemy patterns and placements. On a positive note the coop mode smooths things out a bit, variation is good, and you can have a gnome version of yourself follow you around like a familiar for a bit, but it doesn't weigh out the bad.