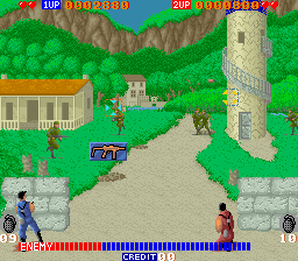 
​
+
Intense action
2-player co-op
Throw grenades at choppers
Tons of sprites on screen without slowdown
Some good bosses
Destructible environment (extra points for larger targets), use the environment as cover (certain enemies target your cover), dodge move (invincibility during it but you can't cancel it or change direction while performing it), bigger projectiles can usually be shot down (your crosshair is a bit too slow for this later on though), some large sprites, somewhat comical (your avatar 'dances' into the horizon after you beat a stage), difficulty options, move while shooting (sort of - can't hold down the fire button)

+/-
Can't credit feed during boss fights (the fight resets)
Some projectiles are a lot harder to see than others (shots blink, shells are blue, but grenades and rockets blend with the background)
Lack of contrast between background and sprites at times
Play as a faceless soldier who doesn't get promoted after beating the enemy forces
Unlimited continues

-
Gets too overwhelming at times in 1-player
Repetitive
A bit short (10 stages/screens)
Crosshair moves pretty slowly and neither it nor your avatar's movement speed can be upgraded
Hard to judge distances and projectile trajectory
Sparse and primitive sounding music, a quota meter decides when a level ends instead of the player killing off the last enemies (feels like you're being interrupted mid-stage), static stages - the screen never scrolls, not much weapon variety (there's an upgradeable machine gun and grenades, nothing else)