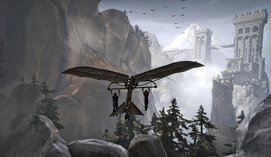 + Innovative team mechanic (control two avatars with one controller, both have different abilites and need to help eachother to progress), autosaving with mostly well placed checkpoints, good art direction inspired by scandinavian folklore and music, minimalistic interface, some good puzzles (lifts in the mine), tells a simple but effective story mostly via its mechanics, the control method ends up being a powerful metaphor for the bond between the two brothers (various co-op segments, swimming scene near the end), decent variation, doesn't explain too much about its world

+/- Obvious ICO influences (sometimes well done - fake language and brother to brother interactions, sometimes shallow - bench sitting), most puzzles seem created and by a designer rather than put there by the inhabitants of the world or being a natural part of the environment, some trophies (pointless?, immersion breaking), the game is a bit inconsistent about teaching you the moves in the beginning (explicity tells you what button to push to rotate the camera or to make the younger brother latch onto the older one while swimming, but doesn't tell you to rotate the analogue sticks to spin wheel devices), some heavily scripted scenes (they look cool but you're really just pressing a button to make it through them), same graphics engine for cutscenes and gameplay, no controllable violence by the player (the younger brother spanks and throws water at some NPCs to tease them)

- No co-op?, some controls could've been better (the context sensitivity isn't quite good enough - sometimes you want the older brother to point you in the right direction and he does something else, parts where it makes sense for the brothers to move farther apart but where they're not allowed to, in the 'lure the dog' segment you can't make either brother whistle/shout at the dog while moving - the segment is also too easy for that mechanic to even be useful), no button configuration (R2/L2 is uncomfortable to use on PS3 controllers), often awkward or pointless and limited interaction with NPCs and the environment (sometimes there's a fairly slow animation just to show the character sitting on a bench and watching the environment, small scenes repeated over and over for as long as you hold the button with no change in reaction or the brother who's not being controlled saying anything, wells and empty houses), many invisible walls and seemingly explorable parts that aren't, sometimes stuttering framerate (doesn't affect gameplay much), inconsistent camera control (sometimes fully rotatable, sometimes you can barely nudge it - for example in the 'stealing the troll guard's key' puzzle), some tedious parts (the lack of a threat of death or failure makes some parts boring, slow climbing), a few seconds of loading every time you die, so-so animation/physics in parts, lack of alternate solutions, odd how one of the sleeping NPCs in the starting village doesn't wake up (similarly the troll guard and imprisoned troll don't react to your destruction of the bridge nearby or the brothers shouting at each other while you're grabbing the key), no difficulty options, no reaction from either brother when throwing sheep in the river, sometimes exact positioning is required for the desired action (the star fall) and sometimes you can get pretty sloppy (hiding from the invisible giant), autosaving with only one slot per game means you can’t conveniently go back to grab missed trophies, plot oddities/conveniences (bird comes to help out of nowhere?, the dad is left on a wooden table for the entire time instead of put in bed to rest)