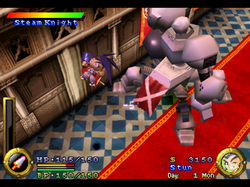 ​
​+
Good variation overall (platforming, pole climbing, minor puzzles, hidden items and one optional boss)
Learn sword combos and throws (also carry enemies around, pretty basic stuff otherwise compared to fighting or beat 'em up games)
Some good bosses (sometimes tough, often large and fairly detailed models, some have several patterns)
Day/night cycle (interesting in theory at least, Musashi gets less agile when tired - eventually can't run and a bit later falls asleep on the spot)
Lots of hidden items and people to save (the latter can then be talked to in the castle)
Climb walls
Double jump (learn it midway through)
Decapitate penguin soldiers
Steal enemy abilities (often used for minor puzzles similar to Zelda or Metroid (some cool ones like bouncing, shrinking, explodable clone, machine gun), sometimes they're nonsensical like the map ability gained from flower enemies in the beginning of the ice palace, some are just obstacle removers/keys), block move (need to be fully charged), elemental magic abilities (fire beam (melt ice, attack or light torches), water shield (walk on water), etc.)
Humourous (silly, quirky, slapstick, parodies the fantasy genre a bit)
Some decent voice acting, Musashi reminds you of where to go or what you were doing when pausing (sometimes it's too vague to be helpful though), some good enemy AI, some interesting quests (follow a dog through a forest), some mini-games (speed and collection challenges, rhythm segment), you can speed up text messages, the earth guardian (innovative gameplay), invisible walls - you can only jump down certain ledges, trolley ride, fairly interactive environments (use elemental magic to alter the environment, swing on poles, climb certain trees and walls etc.), decent weather effects (sunlight, rain, dawn and dusk, ambient sounds), talk to rescued people to receive new combos and other minor bonuses, some good puzzles (finding the last area, forest maze before the frozen palace), shortcut between Steamwood and the village, rescuing the musician characters adds their instruments to the Allucaneet Palace track, some sequence breaking possibilities, save feature (in town or inside dungeons, save points are somewhat far between in dungeons but they did put one before bosses)

+/-
Limited inventory
Very slow movement while charging
Auto-run (need to be pretty awake to run immediately - over 70% or so on the 'tired' gauge, lower than that and it takes a while, lower than 50% or so and you can't run)
Short attack range (and hard to target enemies with the ability stealer)
You must rescue at least four specific villagers to continue with the main quest (very easy though)
Only one solution to the giant ant attack (crushing it with the gondola, which is a bit silly considering its speed and random movement - could've been more interesting if you had to make it stand in one place with syrup or something, it also doesn't die even though it looks like it but instead escapes into the mines)
Pretty easy to get rich after a few chapters
The boots that let you walk up slopes in the Frozen Palace doesn't let you walk up slopes outside of it
Very forgiving about falling into pits (lose about 10 HP and respawn on the platform you were jumping from)
Infinite retries at the trolley ride and first part of the final boss

-
Need to do the most tedious segment twice (fixing Steamwood)
Pretty slow paced overall (see the following points)
Backtracking (Gondola Gizmo is probably the worst, having to question all the three mercenaries to activate the secret path to the thieves' hideout)
You'll often have to talk to everyone to know where to go next
Dull firefight quest (gets tedious because of the water crest having such a short time limit)
Pixel perfect jumps (running jumps don't give more reach)
Cheap enemy attacks (shots from off screen right when you're climbing a ledge, falling boulders in the raft ride segment, attacks through some walls in the frozen palace)
Some enemies take too many hits to kill (wolf men)
Somewhat sloppy hit detection
The day/night cycle gets annoying when you have to sleep to continue the story or make stores/houses open (you also have to watch Musashi sleep unless you're in the castle or an inn, alertness can be increased temporarily with mints though), you also have to let Musashi rest once in a while or he'll become slow and weak (in an inn/castle/dungeon, not outdoors)
Very limited camera control (only zoom in/out during action scenes and it doesn't always pick an optimal view), the ghoul dungeon, most voice acting is pretty obnoxious (but sometimes funny), most food rots after a day or two (which is like 20 min real time) and becomes redundant after a while because you'll have enough money to buy medicine instead, slow transitions between areas, need to open chests from the front (no challenge reason so it's just time consuming, the lightable torches and the scroll tablets are also really picky about placement), no strafe or dodge moves, no inventory sorting, some tedious platforming (mountain area, Steamwood, frost palace), some slowdown (frost dragon), no world or town map (makes navigating in town a bit of a chore and the zoomed in view doesn't help), unskippable in-game cutscenes, silly/stupid plot devices (such as the thief disguised as the princess 'forgetting' to take the shopkeeper's money with her), the game doesn't stop while you're reading signs, NPCs don't always give proper directions, can't choose exactly how long you want to rest at the inn or castle, some annoying music, a couple of obtuse puzzles - finding Seer Bevealy (looks like a wall rather than a slope where you need to get up), making the yeti enemy throw you up to a platform in the Frozen Palace (enemies don't help you otherwise and if you don't let it hit you you won't see how it's useful), tedious maze segment in the final area