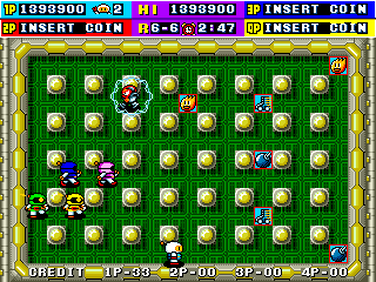 +/- Pretty steep difficulty curve, some items are just for points (leads to 1-ups?), only single screen levels, killathon (kill all enemies in a level to progress), levels end immediately when you've killed all enemies so any items left are missed,

- No vs. mode, upgrades don't carry over between levels in SP (creates difficulty spikes at the beginning of levels), some control issues (the auto-adjusting when moving into a corner is too loose and makes you move sideways even when hitting two blocks of wall or one block head-on), pretty repetitive, no power ups that let you move through or kick your bombs, somewhat basic FM for the music, some annoying enemies (world 4's temporarily invincible enemies), only 6 worlds, not much creativity in terms of the level design (enemy design is good though)


Comment:
I mistook this Bomberman for Bomberman World, which has a vs. mode. This is a good, not quite great take on the formula with some interesting enemy design and there is the 4-player co-op which should provide some chaotic fun. I tend to get bored with SP Bomberman but this one is a bit shorter than usual and didn't really overstay it's welcome.
​