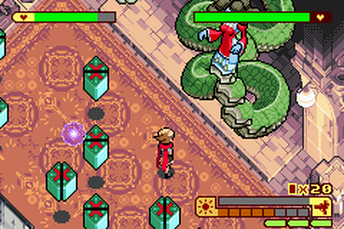 
​
+ Creative mechanics (IRL sunlight levels affect your ammo/weapon charge access (and Pile Drive machine access - purifies immortals/vampires) and some enemy behavior (undead enemies also die from sunlight), the game's day/night cycle follows real life time based on area settings - time passes faster than IRL though?, the solar sensor in the cart can make your solar gauge in-game overheat if it receives extreme sunlight for too long which renders your solar gun useless for some time, the sensor also stores energy and puts it in solar stations in-game for later use, solar energy can be stored in the game's solar bank to gain interest and pay debt - this energy can be transferred to the solar stations and also be transferred to other saved games, can pull enemy drops/fairies towards you with your weapon, ), stealth elements (similar to Metal Gear 2 except with an isometric perspective - hug walls and sneak alongside them or hit them to lure enemies, some surfaces make noise when walked on, etc.; attacking from being does more damage), nice area introductions, some voice acting (decent, pretty good sound quality), look around mechanic (hold R), two-pronged difficulty options (action and puzzles, easy or recommended), new game plus (keep equipment plus once you reach the Solar Tree again you can look at each area to see what you missed the first time through), unlockable hard mode (better rewards here) and Dark Gun parts set (beat once=Dark Lens, beat hard=Phantom Frame and Chaos Battery), "Dark Loans" bank debt mechanic (dark sister bank to the solar bank with high interest loans; loans are paid for with sunlight charges and if you don't pay back you'll be haunted by Darkness Bugs until they steal back enough Sunlight - you can play a boring treadmill mini-game/chore to generate energy if you don't have enough to pay back), the Dark Card item makes the dark loans bank accessible from anywhere in the game, can level up some gear (can equip what you want to level up right before killing an enemy/boss to make something gain the full exp), warp past beaten dungeons, warp items, ranking system (time taken, times you were found, continues or fool card resets used) - better prizes for getting a higher rank, upgradeable lifebar, good puzzles overall, can reset your progress in a dungeon using the Fool card (affects ranking though), see hidden objects item, silent steps item, temporary invincibility item, pretty good bosses (multiple patterns), basic crafting/farming (combine and plant a fruit/vegetable/mushroom with another one at the solar tree and come back about a day later to reap something new, can also plant a single one to get more of it), enemies with elemental affinities, mini-bosses, transformations (mini form achieved by using the red mushroom - needed in sol city), fight alongside an NPC ally vs. the final boss, link battle mode (haven't tried it),

+/- Mostly non-linear structure (branching paths between dungeons - can also go back and play dungeons that you moved past earlier, some backtracking for unlocking new paths in a beaten dungeon with a new ability/weapon), non-interactive tutorial videos, Kaamos curse (if you opened the Treasure Chest in the room after beating the Axe in the Abyss and you haven't gone through Sol City yet you'll be hit with the Kaamos - To get rid of this you can either wait 5 days or you can cheat the clock and set it to 1 minute before Sunrise and stand under the Solar Tree; Once the Sun rises the tree will drop a dew and it'll remove the curse from you), can use a UV lamp or a Black Light to trick the game while indoors or playing at night, can't see enemy line of sight, enemies can't move between rooms (their position and current state are saved when exiting a room though), unlimited lives/continues (restart at the beginning of the current area/room), can run but only by using a consumable item (speed nut), star lens (collects energy for the solar station) probably should've been a passive ability instead - makes you unable to attack so you'll have to go into the menu to use it in specific situations, need a sunlight source for certain rooms to be able to attack the enemies in them, can't push stunned enemies (have to hit them with weak shots over and over instead), no dodge or block moves, lower capacity for the solar station and solar bank (999 solar units compared to 9999 in the sequel), can't buy grenades or fruit/vegetable/mushrooms,

- Leveling up your gear takes too long and is basically required to not have a huge difficulty spike at Sabata, tedious backtracking out of boss/immortal dungeons (have to drag a vampire's coffin to outside the dungeon's entrance and purify/exorcize them (sometimes you'll end up moving through a different part of a dungeon though), the coffin occasionally starts shaking and knocks you away from it), the map doesn't show your exact position in a room (only which room you're in and the direction you're facing) nor does it show the topography of a room, can't transfer energy stored in the solar station to the solar bank here (added in the sequel) - stations become rarer in the late game, invisible walls here and there, the passcode puzzle in the final dungeon is pretty vague, some trial & error (bad clues for the last puzzles in the final dungeon, trapped chests, getting found during a boss fight/trap encounter doesn't count towards your ranking, killing an enemy and having it turn towards you while using a charge attack doesn't count as having been seen, amount of energy charged to your solar station doesn't affect rank), can't play as a pacifist without getting spotted, no load function in the menu (kinda pointless how the fool card makes your rank drop since you pretty much need to practice a dungeon to be able to get the highest rank, boss patterns, fruit combos, ), you keep finding the same item type after getting a full stock of that item (such as health), some slowdown, can't sneak around corners, easy second boss (wolf) if you got the flame grenades, somewhat pointless to have the travel paths between dungeons/boss areas be interactive since they are just small paths with nothing to explore beside them, some obvious tips from written notes and your sidekick, no "wait" feature - need to time one dungeon and the solar banks with the daytime cycle, can't check a lens's current experience level progress?, somewhat tedious segments at the beginning of sol city and fire part of the final dungeon (sudden wind changes and if you fall down you lose a credit - have to use a speed nut), overly drawn out final dungeon with repeated bosses (they're a bit harder though except for the count for some reason),
​