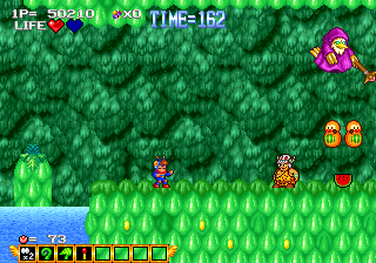 ​​
+
2-player co-op (player 2 can jump in at any point)
good use of color overall
pretty fast paced
shops (flowers serve as currency, buy different weapons and gear (for example a safe that lets you keep items for longer)) and NPC encounters (similar to Wonder Boy in Monster Land)
mini-games
alternate paths through levels, choose your own path (between two levels at a time?), wonder boy-like art direction, good enemy variation, turn small (run faster and jump longer, can't attack), item inventory, difficulty options (8 levels, starting lives (up to 9), coin worth), "how to play" cutscene before starting, warps (can select destination but the further you want to go the higher the price), three different weapons (leaf - upgradeable, boomerang - non-upgradeable?, bomb - non-upgradeable?), duel mini-game (similar to Yoshi's Island - need to hit the other guy before he hits you), pick up and throw enemies (the twist is that you can stack several enemies on top of each other before throwing for a wider projectile), can choose not to fight bosses (causes a fake game over screen), can jump on smaller enemies but it makes them spin away (means you can't throw them), smart bombs (trigger as you touch them variety, fairly rare), hidden items, lottery mini-game after beaten bosses (can win flowers, cocoons, safes, life upgrade, lucky ring (after getting 4 hearts, not sure what it does)), alternate endings (a bit different depending on if you win the second duel with your rival), good bosses overall, decent intro cutscene,

+/-
Small sprites (fairly big bosses though)
short lifebar (two hits on Normal or lower – can only be increased (up to 4) by winning first prize in the lottery which is happens very rarely on Normal)
becoming small seems very situational since there are so many enemies around (can't attack while small)
environmental theme
goalpost mechanic is pretty much ripped from SMB1
pretty steep difficulty curve, level timer, weapon quirks (can't aim the bomb straight downwards and the upward throw is really short, the boomerang kills enemies instead of knocking them over and you can't shoot down, can't shoot up with the leaf), respawn on the spot even after continuing - you lose your items so it can be bad in some situations, forgiving hit detection when jumping onto platform edges but not when jumping off of them, rare health drops (can buy them but shops are also pretty rare), low rate of fire (can't be upgraded?), fairly hard to gain extra lives (can't buy cocoons (3=1 life) in shops - only find them or win them in the lottery) - can buy gold cocoons in some shops but they're expensive, short invincibility time during transformation, infinite continues in either version (can be changed), can't replay beaten levels or go backwards on the level select map, no life refill after bosses unless you win it at the lottery,

-
No weapon inventory (you have a pretty large item inventory so why not?, sometimes hard to avoid picking up an unwanted weapon, some weapons make certain situations much harder)
short time limits on shopping and NPC dialogue
fairly high default jump height
odd swimming controls (no forward momentum unless you're walking off a ledge or pressing the jump/swim button plus you can't turn around without stopping first (and that's with the swimming fins))
trial & error (unforgiving hit detection on the green robot enemies in the factory level when trying to stand on them, occasionally hard to tell if something is hazardous, inconsistencies about where you can swim, usually no clue to hidden item container locations, can't become small or use your current weapon in the duel mini-game, some invincible and fast flying enemies, some cheap enemy placements, )
​can't attack while big/invincible, kinda generic (even ugly at times) sprites and character artwork overall, very poor translation (sometimes funny though), uneven quality FM for the music, can't move more than 1-2 screens backwards in a level, the factory levels are kind of tedious (too many enemies, not enough flow), fake choice after beating the final boss (he'll attack again regardless of if you choose to pardon him or not), mechanical city and final area are pretty similar, safe spot at the turban-wearing boss (beginning of final area),