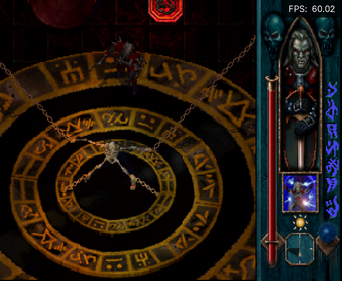 ​+
Unusual beginning (get assassinated as soon as you exit the tavern, then get turned into an undead)
Can teleport back to the beginning mausoleum at any point with a spell you gain there, Can also teleport to certain visited points in the world when outside via the bat form
Can drain life from stunned human enemies - means you generally have a way to restore your health nearby
Control config (not the shoulder buttons though)
Stats screen (options/select menu, kills, meals (how many you've drained the life of), mutilations, secrets (shows how many you've currently found and how many there are in total), time played, prestige/title - similar to Pirates)
Resurrection item (Zelda 3 fairy)
Transformations (wolf form - can jump and moves faster but can't cast spells, mist form - fly over larger bodies of water+spike floors+swamp+through certain locked doors, peasant disguise/nobility disguise - talk to villagers/talk to nobility after upgrading it) - these drain MP while used
Day/night cycle and moon phase with some gameplay effects (take damage from sunlight, also take damage from rain and water pools - the former seems to happen randomly, wraith armor works at night only, moon gates only open when it's full moon however these locations are optional)
Can trade life for sub weapons or other items at certain points (spirit forges)
Life and stat upgrades (HP via found vials; three MP regeneration speed upgrades via found blood fountains). The fountains also give you abilities and protections: three strength upgrades for pushing larger and larger boulders, rain protection, snow protection, nobility disguise
Some interesting spells and sub weapons (slow time for everyone but yourself (doesn't affect traps though and doesn't last that long), Font of Putrescence - projectile that leaves an acid pool which melts enemies, Pentaliche of Tarot - random death to multiple enemies, light - temporarily light up a whole dungeon, inspire hate - enemies attack each other for the duration of the spell, control mind - possess a human enemy, area of effect life drain, spirit death - kill most nearby enemies, lightning - hits all enemies (outdoors only), spirit wrack - possess any non-boss enemy, repel - shield that also reverts enemy projectiles back towards them)
Some interesting gear (bone armor makes weaker undead enemies ignore you, chaos armor - enemies take as much damage as they deal to you, flesh armor - auto-drains blood, wraith armor - 50% of damage taken is dealt to your MP meter instead, spiked mace - stuns some enemies and breaks some obstacles but has a shorter combo and is weaker overall, flame sword - burns enemies (can't feed on them if you use this though) and sets hay floors on fire, soul reaver - enemies explode in one hit but can't use spells or items while it's equipped+it drains MP, flay - homing projectile)
Pretty good VA (decent monologues by Kain while the game shows some artwork when entering some new rooms or areas though these are done better in Soul Reaver)
Some decent puzzles (switch combinations, timing puzzles, mind control)
Play as a vampire and a bad guy
Some interesting enemies (enemies that summon zombies, enemies that bounce you across slippery surfaces, zombies that need to be blown up to stop them from resurrecting, enemies that teleport behind you as you walk up to them)
MP regen (overly slow before upgrading it three times though and even then it's kinda slow)
Decent bosses overall
Pretty good variation
New gear shows on your avatar (Wonder Boy in Monster Land, Hydlide III, Faxanadu, Dragon Crystal, Diablo)
Skippable cutscenes (but not spoken dialogue)
Different themes for each flight cutscene when going to a new dungeon area
Fight alongside an NPC army at one point (recruit an army to help fight against a monster army, pretty cool scene though the music doesn't quite fit and you're meant to move north rather than fight as enemies and allies keep respawning)
Two different endings (get to choose whether to damn or save the world right after beating the final boss - the "good" ending sucks though and both are rather short)

+/-
Mostly linear structure (optional mini-dungeons here and there, various optional hidden items to backtrack for with gained abilities (100 secrets in total), partially non-linear nuprator's keep dungeon and lava area dungeon - most non-boss dungeons are pretty much linear, maze-like cave area before the forest dungeon)
Save points (15 slots per card, only shows time taken according to the in-game clock)
Map feature which shows the entirety of the current area as well as your position (somewhat spoils the exploration aspect when reaching a new area, doesn't mark items/points of interest/exits nor boulders and rock pillars/statues, it being a a very zoomed out and pixelated view of the whole current area also makes it harder to read than a simple map a la Zelda 3)
World map screen via the options menu - shows where you've been by darkening unvisited areas (good clarity but only marks certain points of interest)
Can't talk to or free the prisoners in the mausoleum or NPCs outside (only kill or drain the life from them (which also kills them)) - gain the ability once you gain the disguise a few dungeons into the game
Dated CGI cutscenes (a bit tacky even for the time, decent camera work though)
Some rather cheesy lines ("nothing is free, not even revenge")
Camera zoom feature (two levels, see below however)
Voiced item descriptions in the inventory menu
No block or dodge moves. No knockback or stun when hitting enemies until you've weakened them and they stand stunned for a few seconds and then die - leads to some combat becoming hit and run-based
Enemies and prisoners respawn when re-entering dungeon areas
Can't fly around within an area in bat form - it's simply used as a fast travel ability
Can review certain cutscenes via the dark diary feature
Weird how enemies can only be drained of life the first time you're in a dungeon area and then only of MP when revisiting it - in overworld areas you always get HP. The game also isn't consistent about this
Can't cast spells or use items/sub weapons while equipped with the two axes (can't equip just one) or the soul reaver
Can't attack while jumping in wolf form (some delay to its melee attack)
Can't attack certain NPCs
Gore (can make enemies explode into bits)
Can't jump back down to the second floor of the first large building in your home town and it's emptied of enemies while passing through the second floor
Acid pool shot and repel are pretty OP and repel+the third armor is very OP (you can just walk into various enemies and have them kill themselves by attacking). Electric bolt is kind of OP as well (until the mid-late game) and so is the area of effect life drain
Can't carry vials of blood placed here and there with you for later use
Clearly marked points that you can walk onto to examine something next to it or trigger a comment about the general area/situation (red triangles)
Soldiers in towns respawn when entering buildings
Hunger mechanic (very slow draining of HP if you don't feed on blood)
Kain pretty much embraces his vampire form right away and is pretty stereotypically evil as well (you didn't learn much about him before he transformed so maybe he already was an asshole but some more fleshing out of his background or more of a gradual transformation would've been more interesting). Going by his comments when picking up spells it also sounds like he's familiar with them

​
Bugs:
-Have to first press down to be able to select a sub weapon from the menu after opening it - emulation issue?
-Can lock yourself out of a life upgrade in the electric bolt dungeon if you teleport out of it before opening the left door to the second room (the door to the right closes after you when going into the puzzle room)
-Game replays the dialogue from killing your assassins if you revisit the northeastern graveyard area
-Noticeable noise at times when everything else goes quiet - emulation issue?
-You sometimes end up somewhere different (still in the same overworld sub area though) after having teleported to an area from within a dungeon and then exiting it

Notes:
-Got the Count rank and 51/100 secrets (couldn't be bothered to wait for the moongates and lost city area to open in the late game)