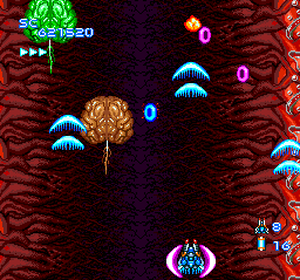 ​
​
+ Mini-bosses, you can shoot powerups to make them stay at the weapon you want (otherwise cycling through them), adjustable ship speed, gun drones (replaced by either of the four sub weapons), some large and detailed bosses, homing missiles (sub) and laser (main), full and side shield power ups, smart bombs (pretty small though),

+/- Getting hit from the side without the full shield (S) means you lose one weapon level, power ups don't stay on screen for long,

- Only 2 of 4 weapons are good (2 and 3, 4 can be good in one or two situations), starts off kinda slow paced (and there are a few fairly long pauses in the action spread out across the game), long stages (area 8 gets tediously long and repetitive), pretty easy first four bosses (easy area 8 boss if fully upgraded), somewhat generic looking, you lose everything when dying, so-so sfx, repeats all bosses once (first boss repeated in area 7 IIRC, the rest as a gauntlet in the last level), no weapon inventory (some power ups don't cycle meaning you have to avoid them along with the enemies and bullets), no difficulty options?, gets much tougher in the final level (you also start respawning on the spot in some parts of this level)