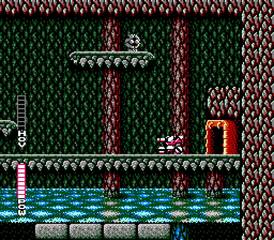 
+
Huge world with varied environments for the time
Control both a tank and its pilot (you can exit the tank and it's required to reach some areas)
Good bosses overall (large and detailed)
Large assortment of weapons & upgrades
Metroid style gameplay
Nicely animated player sprite, after beating a boss you'll get teleported to the entrance of the overhead area you're currently in, flight and swimming, mixes sidescrolling and overhead gameplay, conveys a sense of vulnerability well in Area 5 (where the tank malfunctions and you'll have to swim around looking for an upgrade), decent cutscenes, wall- and ceiling climbing

+/-
H power ups are redundant until you find a certain upgrade later on
Easy to replenish life in most areas
Easy to farm for power ups/ammo in some overhead areas (everything respawns upon exiting them)
Infinite grenades (very short range, can't break rocks for some reason, effective against bosses)
No auto-fire without a turbo controller
Lose one weapon level per hit in the overhead areas (you can replenish it quite easily early on but it's still tedious), bizarre and comical back story, no strafing, need to check the manual to see what a new tank upgrade does, can't increase your life count?, enemies stop moving when they're out of sight (makes them more predictable but can also make it take longer to kill them), can't see boss HP or if they're nearing death (until they're down to a one or two more hits)

-
​No map (easy to get lost in some later areas thanks to repetitive tiles and rooms)
No save or passwords
Limited continues (four credits with three lives each and the game doesn't tell you how many you have left)
Poor jump height control (unless in water - wtf?)
Rate of H (hover power) drops from enemies doesn't increase when at full health (slows the pacing down considerably)
Need to backtrack from Area 6 to Area 1 at one point (and 3 to 1 earlier), poor hit detection in the top down levels, top down level design sometimes sloppy (can't hit enemies in certain spots because of the way your character holds his weapon to the side, dead ends, randomized reward (sometimes nothing so you have to re-enter the area, odd enemy or item placements, top down areas where the reward isn't worth entering them for), normal enemies in the sidescrolling parts are often small and forgettable, cheap hits when entering new rooms, palette swaps, very unforgiving fall damage when outside the tank, leaps of faith (can't look up/down - however it can often be helped (strangely enough) by entering and exiting the pause menu since this re-centers your sprite), breakable blocks/rocks in the overhead levels respawn when pausing or moving away until they 're out of sight, somewhat floaty tank movement (keeps moving after releasing the button), some weapon levels in the overhead area are pretty ineffective in certain situations (shots that fly sideways or get stuck in the wall in tight areas - would've been useful to be able to switch between them), slowdown (happens every time you fire a high level shot in the top down areas), some tedious ladder climbing, some dead space and minor dead ends, some annoying sfx (blocking boss sound, small mortar turret), can't turn off the wall-riding mechanism (makes the final area very tedious), point of no return bug in the water area (go down beneath a row of rocks after getting the tank's swim upgrade), pretty easy final boss