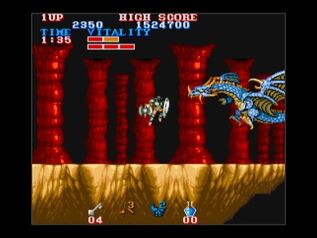 ​
+
Minor RPG elements (save petrified sages by touching them and some will open a shop where you can upgrade your armor and weapon, some will give advice about the game mechanics, some will give extra time and some will give money, status effects (countered by buying/finding potions))
Hidden items
Fast paced and fairly intense at times
Somewhat better jump controls than in Ghosts 'n Goblins (a very similar earlier game by Capcom)
"Tree" climbing (see Mystical Ninja or Ninja Gaiden (GG))
Some large sprites, difficulty options (affects shop prices and enemy hp (?)), initially good enemy variation, start with up to 7 lives, fairly frequent checkpoints, some alternate paths (dungeons), smart bombs (detonate when touched, usually placed in useful spots though), Arremer cameo, some engrish, respawning shop before the final boss,

+/-
Time limit
Small sprites overall
No other special attacks
Need keys to unlock treasure chests (fairly cheap and common though)
Unlimited continues?
Can't move while attacking, arrows telling you where to go or where an exit door is (they are somewhat helpful but don't fit the setting at all), sometimes random money drops from enemies? (or there's a certain timing to it, can make a big difference), the hit detection takes some getting used to (some enemies don't have a hitbox right away, items have small hitboxes), most enemies stay dead after you die (you also keep your current weapon)

-
No jump height or length control (you also fall straight down when walking off a ledge)
Trial & error (some blind jumps, some attacks take much more HP/armor than others, traps and ambushes everywhere, boss patterns)
Somewhat repetitive (repeats a couple of bosses and many enemies, repeats advice, backgrounds as well)
The money reward from the sage doesn't scale (always 100), a bit short (8 stages)
Some useless advice
​No alternate weapons, some bland backgrounds with mostly black in them, some annyoing sfx (mostly high pitched PSG stuff while the music is in FM), inconsistent jump physics when next to a wall and jumping towards it, some very resilient enemies on difficulties around 'normal' (breaks flow a bit), no use for your shield, money drops can get stuck inside walls, cheap at the end of stage 7 (falling boulder right when you’re jumping between climbable walls)