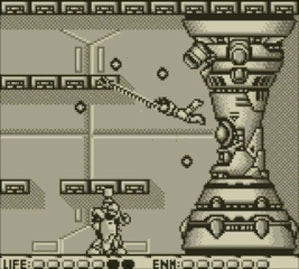 +/- Same story as on NES but with a few changes and somewhat better dialogue, exiting areas still done via a code (why not use the start button?), frequently respawning enemies in some areas, swinging or falling into regular enemies does no damage (see Shinobi) but climbing into them still does

- Lacks the top down encounters of the NES version (replaces them with sidescrolling ones which are more entertaining though), some trial & error (some blind jumps - can't look up/down, hard to react in some parts where you need to swing between smaller platforms), somewhat choppy scrolling (emulation problem?), controls take some getting used to (no tutorial), mostly easy bosses, no difficulty options, some control issues (still can't jump down through platforms which you can climb up onto, momentum still doesn't affect falling direction when walking off ledges), can't move or turn around while crouching, some slowdown and flicker, safe spot on Area 6 boss (mutant), sometimes requires backtracking for long stretches when missing a jump