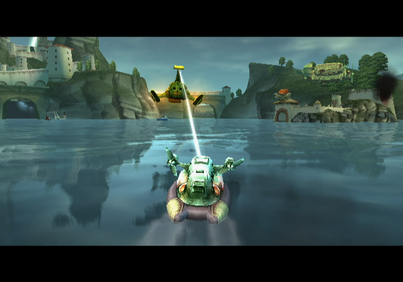 
*Some stealth segments and the final boss's last phase


​
​+
In medias res beginning
Some interesting mechanics (take photos of points of interest or different species and send to a science lab to make money (similar to Spider-Man (MD) and scanning in Metroid Prime)+for proof against the corrupt alpha sections), aimed knocking of stunned enemies and bombs into objects to progress/reach optional items/extract smaller crystals (money) from large crystals while the game pauses for a few seconds - similar to Bash from Ori 1 and aimed throwing in Guacamelee, can subscribe to newsletters from the Iris network and Domz army to get both sides of the conflict, CPU ally moves - the pig can stomp to stun enemies, use food to lure out an animal at one point - an underused mechanic though)
Lifebar and vehicle energy upgrades (found and bought over the course of the game) as well as charge attack upgrades. The charge attack is an AoE attack and the upgrade lets you shoot a few homing projectiles while performing it
Interesting setting and premise (rebel group vs an oppressive military organization propagandizing its citizens and an alien threat infecting people, play as a broke photographer)
Can change directions during an attack combo
Basic dialogue trees and you can offer items to your CPU allies (can actually offer health bar upgrades to them though it's generally better to keep them for yourself) - can also ask almost anyone about plot relevant subjects and get a variety of responses which generally feel believable which adds to the immersion
Pretty good map system (2D TD view map of layouts, shows all floors in the current area and what you've explored as well as items that you've bought a detector for (pearls, animals - can get these after the first dungeon)+some points of interest on the current floor, zoomable though there's only two levels of zoom, quest objective markers)
Some mini-games and optional challenges (good: hovercraft thief chase in the looter's cave (except it's a bit overly punishing when hitting certain obstacles), hovercraft races; decent: pallet game - air hockey variation, coconut shell game (keep track of which one is holding an item), unlockable "yo pearl" mini-game after getting all 88 pearls - navigate two pearls through an obstacle course using both sticks (a bit like Brothers or Binary Land))
Item drop magnet (so-so reach when on foot though)
Some interesting tools/abilities for progression (hovercraft jump upgrade, flight and space flight via the ship; disc launcher lets you press some switches and move some objects from afar; the partner tools are used like keys during exploration)
Good VA overall (partial)
Temporary hovercraft speed boost items (good for thief chases and races) - can't use these to skip the guard robots at sea though
Some voiced assistance during action segments that also don't pause the action (can't review these if you miss them though; Half-Life?)
Can run and roll from the get go (Mario 64?) as well as backflip during combat. Can also perform a 6-hit combo with the right timing from the get go (hit twice, pause, then hit 4 times)
Good art direction, animation and certain visual effects (water effect, day/night cycle - no gameplay effect though)
Some good vocal tracks (latin, reggae, ska punk/rock)
Fight and explore alongside a CPU ally (Secret of Mana/Evermore and Silver)
Shops in the hub area and dungeon/hostile areas (can't sell items though)
Neutralizer cannon lets you lock on to 3 enemies or boxes (Galaxy Force 2)
Some good puzzles (electrical puzzles in dungeon 2, spatial reasoning in the slaughterhouse, some timing puzzles, code to room 2 in the bar) and some decent (light reflection puzzles, some block puzzles, some stealth, knocking enemies into electronic barriers to remove them - generally no limit to how many times you can do it so pretty easy)
Some scripted events during exploration (Pey'j getting caught, surprise chase scenes in the city, alien attacks and attack on your home), some decent bosses (second main boss, reaper, final boss), NPC conversations and behavior in the city evolves over the course of the game, optional stealth in some areas (can fight your way through but it's harder, can stun guards by hitting a weak spot on their backs but not silent takedowns - if there's another guard they'll be notified and go restore the stunned guard), good dialogue overall, some shortcuts, some memorable chars (HH, Pey'j, Jade), can ask your current CPU ally for tips at times, fight alongside CPU ships during the finale (this part is too short though)

+/-
Mostly linear structure (Large hub area w/ a shop and dungeon-like sub areas, can do some challenges (looter chases, animals to photograph, mini-dungeons in the city) and mini-games in any order, key gating on various sub areas early on, can't get the hovercraft and ship upgrades out of order (except via a bug, it's possible to get to the slaughterhouse gate without joining IRIS (which you're supposed to join before the factory) but you can't get in) nor do the main dungeons out of order, mostly linear dungeons - can do the three main parts of the slaughterhouse in either order)
Pretty frequent save points (three slots per game, shows current location only)
Frequent checkpoints (regain half your health when dying)
Collectathon element (pearls to buy vehicle upgrades needed to progress)
Automatic on foot platforming (OoT) and you can't fall off cliff edges when exploring locations - the roll move is used to hop over some obstacles though and hovercraft platforming is manual
Non-white female protagonist who's also not really sexualized
Can't move while looking around in FP view
Can keep inventory health items for later use
The compass shows some points of interest but not the actual cardinal directions
The roll move becomes a sidestep dodge during combat
Get fined for attacking civilian or military vehicles at sea (there's also friendly fire if you hit Pey'j during combat though it doesn't seem to do any damage)
Kinda small areas between loading times (they're short though)
Photographing sometimes involves a bit of stealth to succeed
Can't move while shooting the disc launcher (makes it worse for combat)
Your partners' stomp moves are OP since there's no cooldown time. Being able to hold 11+ of each healing item is also OP
Can't switch to the CPU allies (could've been used for puzzles or to use their abilities to explore)
More than one entry point to one sub area (the city which is like a hub inside the hub which is the overworld)
Some enemies respawn while others don't and shop items in dungeons don't (sometimes there's a switch to let you spawn more enemies for puzzles)
Can't move while charging a super attack on foot
Shooting other contestants has no effect during the races (looks like it should)
HH can move through blue laser barriers while you can't - can't really control him though which seems like untapped potential for puzzles, can't use Pey'j’s shoes after getting them yourself (could've been used for some platforming puzzles but they should've removed the whole fart-driven aspect), partial bestiary (alpha sections units), the enemy guards forget about you rather quickly so you can easily do hit and run attacks on various guards (plenty of them use the one hit kill laser traps on you though), can't grab grenades off of guards or find them elsewhere, no alarms for enemies to push that make more enemies come to your location (Deus Ex or System Shock 2-style), no cloaking ability, flight is a bit underused - few locations to go to once you get the ship, dropped money disappears after a few seconds, using both Jade and her partner for switch and block puzzles is a bit underused (can't tell your partner to stay in place for example) - in the final dungeon you'll be followed by both partners but this is only used to activate a couple of doors and elevators, no teleporters (small world though)

-
Unskippable cutscenes
Some interface/control issues (no mini-map, no maps for optional sub areas like Vorax's lair, sometimes can't control the camera at all, can't place markers or notes on the map - buildings aren't marked on it (photos can be used but their quality and size is so-so and you can't add notes or coordinates to them), can't skip cutscene dialogue on a per sentence/paragraph basis, the game is a bit too anal about your positioning when taking photos - the max range is quite short but you also can't get too close and sometimes it seems like a photo should've worked but didn't when photographing something at a height from below, too much motion blur in camera/FP view mode, can use z to put the camera behind Jade but it also puts you in FP camera mode and generally doesn't work if standing in front of a wall, the camera doesn't always end up behind Jade when switching to FP mode, slow aiming in FP camera mode, have to go into camera mode to see what interactive objects are, the camera is a bit slow to react when turning with the hovercraft, the range at which you can trigger Pey'j's moves is a bit short and sometimes the stomp doesn't work on an enemy, pretty slow block pushing and kind of slow shimmying, annoying automatic camera during some segments - various parts of the factory for example, get taken out of FP view mode if you get shot - can't use the disc launcher outside of it meaning you also can't move while using it and there are a few flying and shooting enemies)
Some trial & error (no course maps for the races or thief chases, a few animal markers on the map are confusing (one in the first dungeon), optional elevator stealth segment in the city, final boss's last phase)
Some tedious parts (in some stealth segment rooms you get spotted by flying robots that take you out in one hit with their laser and these get more common in the slaughterhouse dungeon, some dead space in the overworld and the last dungeon, the escape segment out of the factory and to the bar to cure HH is kinda slow)
No additional lore to the wildlife you photograph (could've been added to the animals photo album)
No dialogue message log (the game does save e-mails and mission briefing disks however)
Can't speak to certain NPCs
No alternate attacks or combat moves gained after the disc launcher besides HH's tackle vs guards which isn't that useful since you're usually on your own when facing them (and his combat move is the same as Pey'j's unless fighting guards)
Usually stupid CPU allies and you can't order them to follow any sort of tactic without your input (see Secret of Mana, Wing Commander or Baldur's Gate for example)
Pretty easy robot walker (factory) boss and easy fourth race+easier second city chase than the first+easy treasure cave in the volcano+the final dungeon and the spider robot boss
Some dialogue repeats as if you hadn't talked to certain NPCs (ming-tzu's shop for example)
It sometimes seems like more optional locations with pearls were planned but scrapped as you'll sometimes be rewarded with 2-3+ gems for finishing a mini-dungeon
Not enough enemy or partner variety after the early game
Kind of awkward how you clumsily jump into the slaughterhouse with the hovercraft
No boss in the slaughterhouse dungeon
Story gets kinda cliché in the late game (Jade is the chosen one) and the villains are one dimensional
Cheesy last part of the ending (Pey'j is infected)
​A bit short


Notes:
-Some cut content (a more complex story with an additional faction and having more than one CPU ally at once)

Bugs:
-Have to re-enter the optional mini-dungeon near the factory if you didn't take out the dark floating robot by knocking it into an electric barrier to be able to pick up the pearls here
-Can get shot through walls at one point (surprise chase scene in the city)